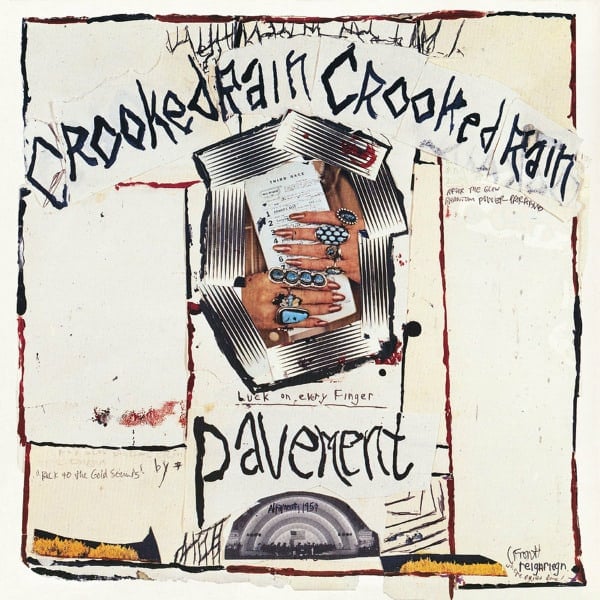 Being the only person in the world not to adore Pavement's sophomore album Crooked Rain, Crooked Rain, I'm not best placed to write this description. Check the customer reviews though for what everyone else thinks about it. The album dropped the loose canon drumming of Gary Young, became (relatively) straight-laced and created a more mature work but one that is still lop-sided and full of their compositional quirks.

Crooked Rain, Crooked Rain by Pavement 3 reviews. Write a review for us »

If you try and pin me down to naming my favourite album I’d either say “Surfer Rosa” by Pixies or “Crooked Rain, Crooked Rain” by Pavement. This is a great summer pop album, but a summer pop album that has been bent in half and twisted. Also, I seem to remember that it was released in February 1994.

Their loose-cannon drummer, Gary Young who would pull on-stage stunts like downing a bottle of vodka and standing on his head for duration of songs where he wasn’t required, or handing out Tiddly Winks to the queue of fans outside the venue, or just not turning up, leaving the band having to improvise a Peel Session, was replaced by crazy individual, but altogether steadier pair of hands, Steve West.

Despite their debut, “Slanted & Enchanted” being absolutely brilliant, I think Pavement came into their own on this. Some of the tracks on this album have two titles depending on which version you have or where you’re reading about them. Opener “Silent Kid” which starts a bit like an old car before kicking into a cool groove and almost anthemic melody is also known as “Silence Kit”. “Ell Ess Two” with its soaring guitar riff has the alternative title “Elevate Me Later”. The song breaks down in the middle as though the band have just thrown their instruments down a hill only to resume beautifully.

All the songs are on here brilliant, perhaps with the exception of the Spiral Stairs-penned “Hit The Plane Down”, but three deserve a special mention: “Cut Your Hair” which is possibly the greatest pop song ever written, “Gold Soundz”, which might be the second best and the laid back country vibe of “Range Life” in which Stephen Malkmus has a dig at Stone Temple Pilots and Smashing Pumpkins, “Out on tour with the Smashing Pumpkins/I, they don’t have a function, I don’t understand what they mean/ And I couldn’t really give a fuck”. It upset Billy Corgan, but then he shouldn’t have stopped wearing thrift-store jumpers and shaved his head should he?

“Stop Breathin’”, “Newark Wilder”, “Heaven is a Truck” and the closing track, “Fillmore Jive” have a beautiful dreamy quality about them whilst the Dave Brubeck inspired “5/4 = Unity” adds another weird and wonderful texture to the album.

The expanded reissued version is loaded with extra tracks, the standouts among them being some of the b-sides of the album’s singles “Strings of Nashvile”, “Cooling By Sound” and “Raft”. There’s also a cover of REM’s “Camera” which appeared on the “Cut Your Hair” single and their REM tribute “The Unseen Power of the Picket Fence” which appeared on the charity album “No Alternative” and finds Malkmus listing his favourite REM songs.

I probably don’t need to say it but this album is absolutely essential.

Really, if you don't own this, then you have no credibility as a music lover. This is what happens when parents give their kids too many e-numbers in their diet, and then send them off to college. No denying it, Malkmus is better than you, in every possible way... don't even bother trying to rebute it. Crooked Rain is the answer to all your lifes questions. Genius never sounded so accessible.