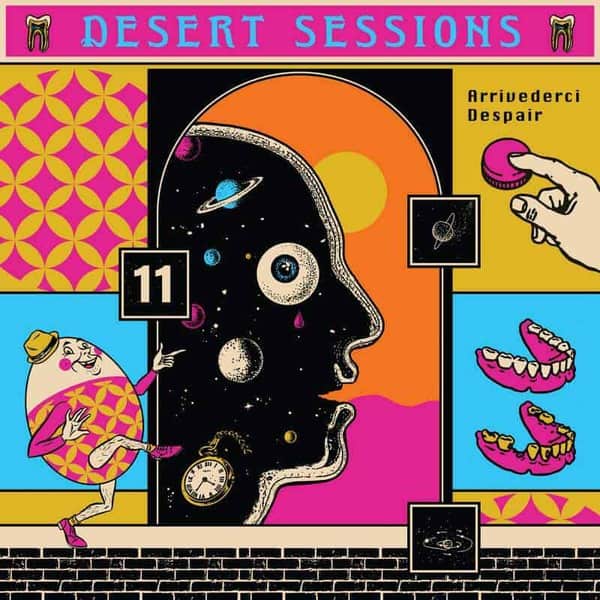 Josh Homme (Queens of the Stone Age), the master of 21st Century meaty-rock collaborations, hereby offers his joint effort with help from a handful of esteemed industry friends. Featuring appearances from members of likes of Warpaint, Scissor Sisters, ZZ Top and Royal Blood, this will mark the first Desert Session release in 16 years - but boy has it been worth the wait.

All of this makes me want to hate ‘Desert Sessions Vols. 11 and 12’ - but I also wanted to hate ‘Era Vulgaris’ and ‘Like Clockwork’, and I still spin those from time to time. Entitled ‘Arrivederci Despair’ and ‘Tightwads & Nitwits & Critics & Heels’ respectively, this is the first new music from Homme’s drug-hazed Joshua Tree love-ins in 16 years.

Things don’t start well. The Billy F. Gibbons-helmed opener ‘Move Together’ confirms the worst aspects of various-artists projects like the Desert Sessions. When you get assemble a random bunch of musicians and ask them to play together they’re either going to push themselves or revert to type. From its deeply uninspired opening couplet - "She don’t like my empty whisky bottles/I don’t like the smell of her hairspray" - to the plodding outro, ‘Move Together’ is very much in the latter camp.

That said, a few of the points where the assorted cast try something new don’t really work either. Jake Shears goes to ape Homme and ends up sounding like that bloke from Whitney on the pleasant but disposable ‘Something You Can See’, while Homme returns the favour and hits sub-Rufus Wainwright for album closer ‘Easier Said Than Done’. The Orientalist codswallop ‘Far East For The Trees’ (bad title) simply never needed to be written while ‘Crucifire’ (worse title) is the sort of lumpen riffer that vocalist Mike Kerr often delivers via his day-job in Royal Blood. As for ‘Chic Tweetz’, a track helmed by Matt Berry and someone dicking about under the name Töôrnst Hülpft … have you ever heard the 70s novelty hit ‘Disco Duck’ by Rick Dees and His Cast of Idiots? Imagine that, but like … neither about disco nor a duck.

However, there are a couple of moments here that come close to salvaging the record. Newcomer Libby Grace outshines many of the more vaunted singers on ‘Desert Sessions Vols. 11 and 12’ with the earthy Spaghetti Western ballad ‘If You Run’. Meanwhile ‘Noses In Roses, Forever’ is one of the best things Homme has written in a long time. The core song, which finds Homme in ‘Era Vulgaris’ mode, is very good indeed, but it’s also full of the playful and daring asides that have long stood Homme apart from the pack. In a style of music in which you’d think everything has been done by now, it’s really impressive that Homme continues to find ways to innovate while still staying true to his craft as songwriter. As much as I don’t want to give him credit, credit is what he deserves.