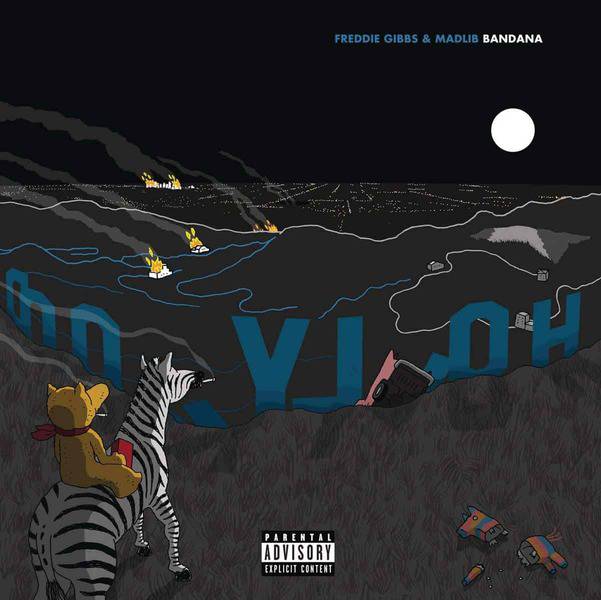 Been a long wait for this one. Anyone who’s had even a passing interest in hip-hop throughout the 2010’s knows that Pinata, the 2014 collaboration between Freddie Gibbs and Madlib, is one of the strongest rap full-lengths of the decade. The pair repeat the trick on Bandana, an LP five years in the making. Though the weight of anticipation must have been heavy for this one Gibbs and 'lib are as steely-eyed as ever - Gibbs spits iron-wool bars over Madlib’s beat odysseys. Masterpiece, obviously. Pusha T, Killer Mike and Yasiin Bey are among the guests.

Madlib is just one of those musicians we never get tired of hearing here at Norman. Whether he’s creating wildly psychedelic hip hop as Quasimoto, collaborating with some of the best MC's around, crafting mind-bending mixes, or shaping beats plundered from the dusty depths of the underground, he’s always someone we can rely on to make some top-tier records. His second collaborative effort with Indiana rapper Freddie Gibbs is no exception to this rule.

When their first recording partnership ‘Piñata’ was unleashed five years ago, it was surprising to see a producer known for his backpacker-baiting hip hop to work with a high-profile gangsta rapper like Gibbs, but they succeeded in pulling off one of the greatest hip hop albums of its era. Here on ‘Bandana’, they’ve somehow managed to improve on the modern classic by streamlining their compositions: shortening the track lengths, reducing guest spots, and polishing the lyrics and MCing. Seriously, Gibbs is a beast throughout this record. His diction is delivered with an increasingly fiery style, the bars are loaded-off in a rapid-fire manner, and his wordplay has become more meticulous whilst remaining humorous. Freddie shrewdly references an infamous Lil Wayne faux-pas in ‘Giannis’, ad libs a bunch of crafty bars on ‘Freestyle Shit’, and delivers several career best verses on ‘Crime Pays’.

The pairs chemistry is clearly apparent on ‘Bandana’, as Mad provides the perfect instrumental backdrop for Gibbs’ felony fables, offering hasty beat-switches, esoteric jazz samples, and lush psychedelic soul suites for the records entirety; we even hear a trap beat on the exceptional ‘Half Manne Half Cocaine’.

The guest spots here include a slew of rap royalty, showcasing the talents of scene veterans Black Thought (of The Roots), Yasiin Bey (Mos Def), Pusha T, Killer Mike and Anderson .Paak, who leave their signature on the LP.

Twenty-five years ago, conscious MC Common beefed with Ice Cube after writing about his distaste for gangsta rap in ‘I Used to Love H.E.R.’. Fast-forward to 2019 and ‘Bandana’ has confirmed that the ostensibly disparate worlds of alternative hip hop and gangsta/hardcore rap can collide to brilliant effect.