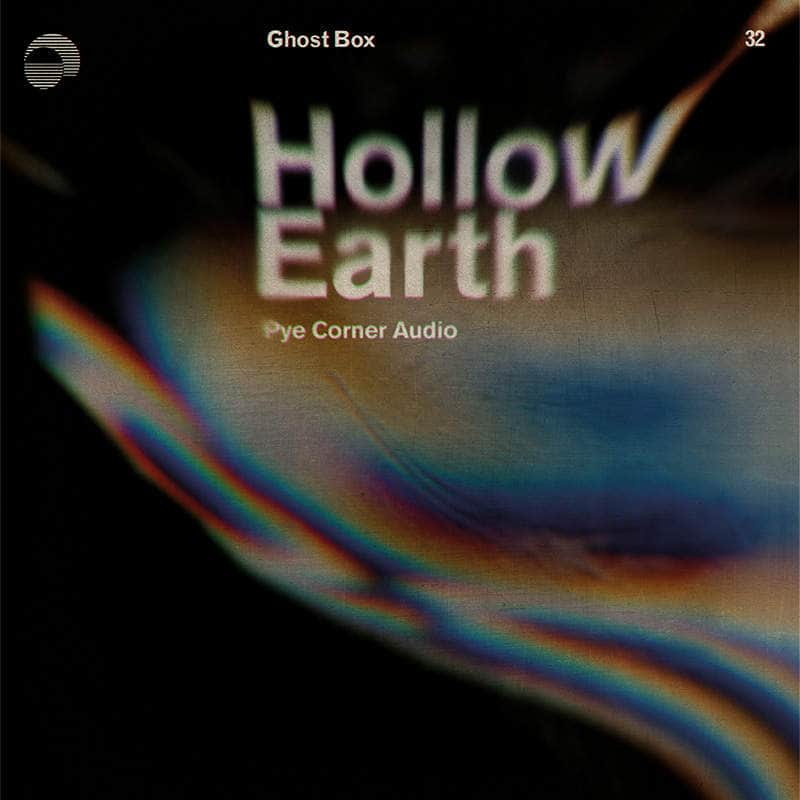 Not to be confused with 2017 EP Where Things Are Hollow (which is really good, by the way), here we have another new LP from Pye Corner Audio entitled Hollow Earth. The third album Martin Jenkins has done for Ghost Box as PCA sees him updating the sound of some of the label’s classic artists. The quixotic electronica of The Focus Group and The Advisory Circle is beefed up with a little bit of techno edge by Pye Corner Audio here.

We’re both fortunate and grateful.

Thanks to our friends at Ghost Box we can offer you, dear customer, this new album from Pye Corner Audio bundled complete with an exclusive and exceptionally tasty tote bag. High quality, heavy duty canvas. Two colour screen print. Designed by Julian House (the fellow responsible for Ghost Box's instantly eye-catching aesthetic). The last bundles went quickly, and so will these.

Or, if you happen to be one of those evil streaming types who won't be grabbing the vinyl, you can just grab the bag instead. Fill it full of heavily-salted snacks and cheap lager on your way home from Aldi.

So, anyway, what about the music itself rather than the means of carrying that music? The Head Technician (Martin Jenkins) returns to Ghost Box with his third full-length for the imprint. ‘Hollow Earth’ comprises 15 tracks that are destined to delight his cult followers, and should more than satisfy those that have been following his work since he first emerged with the Black Mill tapes series.

The DNA of pre-ambient, Berlin-school electronic music pulses throughout this album: Tangerine Dream, Klaus Schulze, Manuel Göttsching, etc. There’s always been a very retro/nostalgic core to Pye Corner Audio’s music, so this is no real surprise. But Jenkins has always put something of himself alongside his influences, and what he creates has always been more than mere carbon copies.  So it’s interesting that the label mentions the euphoria of 90s house music. I really got that vibe and energy from one of his live performances a few years ago, and it’s certainly present on 'Hollow Earth'. It's subtle, of course, mirroring the element of nostalgia. Like a sort of yearning for halcyon days - that same feeling that certain Boards of Canada stuff evokes.

‘Mindshaft’ is a good example of this - a track which manages to combine the slightly kitsch/retro Ghost Box-type sound with the darker end of New York house. It kinda reminds me a little of Joey Beltram or something that could almost have come out on legendary NYC house imprint Nu Groove. Similarly ‘Core Sample’ and the gnarlier ‘The Seventh Labyrinth’ head into the shadowy edges of the dancefloor, while there are plenty of more trippy inner/outer space moments in ambient melters like ‘Subterranean Lakes’, as well as much murkier, darker spaces to explore in tracks like ‘Quad Tape Substrate’.

‘Buried Memories’ is a title which I feel sums up the record and indeed much of Martin Jenkins’ output as Pye Corner Audio. Essentially, it eludes to the whole Hauntology aspect of his music: magically unlocking those moments in your life that were filed away deep inside your brain. That effect is still present in this album and it is, I suppose, a hallmark of his sound. But in many ways, it feels like Jenkins transcends the whole Hauntology thing, and perhaps has done since his 2015 ‘Prowler’ album on More Than Human.

So 'Hollow Earth' certainly does enough to retain his established fanbase, and there’s also appeal outside the usual PCA oeuvre which should welcome new followers. It’s a record that’s effortless to get lost in, with elements of suspense and dark intrigue, plus some dancefloor appeal for the very wee hours, with more than enough to submit yourself to in a headphone session. Apparently conceived as a sequel to 2016’s ‘Stasis’ it certainly feels like it’s taken the darker sounds explored on that record somewhere towards their logical conclusion, ending with ‘Surfacing’ which feels like the light at the end of the tunnel.