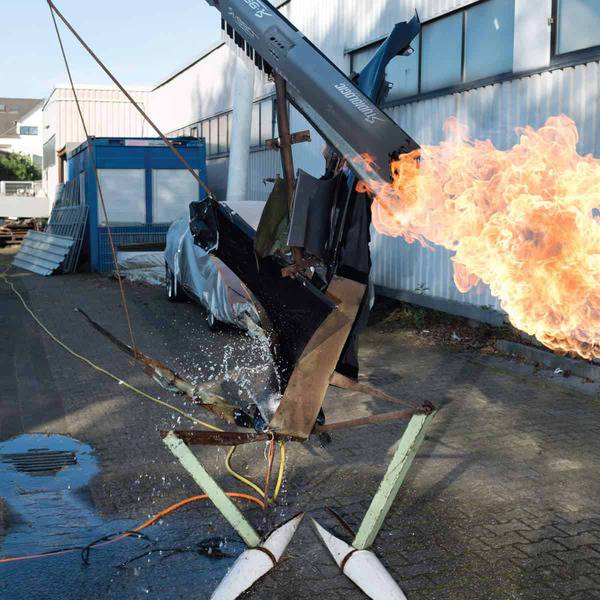 Master sonic architect Tim Hecker returns to Kranky with an album which takes inspiration from conversations with a recently departed buddy. 'Konoyo' was mostly recorded in a Japanese temple just outside Tokyo in collaboration with gagaku ensemble Tokyo Gakuso. Hecker manipulates their source sounds (strings, woodwinds, percussion) and re-shapes and sculpts the raw material into his own vision, focussing on negative space. The resulting sombre mood has a ritual/ceremonial weight - as though he were channelling communications from the great beyond.

Bloody Tim, he just does it, doesn’t he. Every time I read a completely baseless interview with him or watch him performing in the dark as if it’s some kind of radical act, I want to renounce Hecker and all his works -- every time I listen to him, though, I just start clapping and crying instead. Case in point: I thought it was utterly rich of him to use his new album’s press release to bemoan modern music’s ‘banal density’, given how bold and boisterous his recent records have sounded. ‘Konoyo’ was an immediate write-off, and then, of course, I put it on, between the headphones, and it ruled.

‘Konoyo’ is focused on ‘negative space’ and made in collaboration with the gagaku ensemble Tokyo Gakuso, celebrating and then rerouting the group’s timbral set up of strings, woodwinds and percussion. It all sounds very Hecker, in theory, as he once again suffuses his own musical identity with another, deconstructing, abstracting and often covering over the entirety of the ensemble’s sound. You can hear occasional flourishes or melody keening through the ambience on these tunes, but it’s usually presented in the typical bellicose miasma that Hecker favours, as a chance moment in a template of controlled chaos, offering melodic, thematic qualities to his abstract aesthetic.

Hecker’s presentation of his source material is typical of him -- and a whole conversation deserves to be had about his interest in manipulating source material in an almost anthologised style -- but this is a whole new structural approach for him. The scattershot noise effects of “Is a Rose Petal of the Dying Crimson Light” mix with whining, scratching strings and a meandering keyboard melody (which sounds vintage Kara-Lis Coverdale, his collaborator through and through to this date) that sound like no other ambient music currently being made, not filtering through but developing more horizontally. The twists of “Keyed Out” are immense, the tune rerouting from a meandering stretch of sound into the dramatic, offering a new kind of narrative songwriting Hecker has rarely, if ever, tried out before.

In creating something sparser, in which instruments seem to converse as much as they collide, Hecker has found a different level entirely. When you get used to the way it's being assembled, 'Konoyo' is its own kind of beautiful.