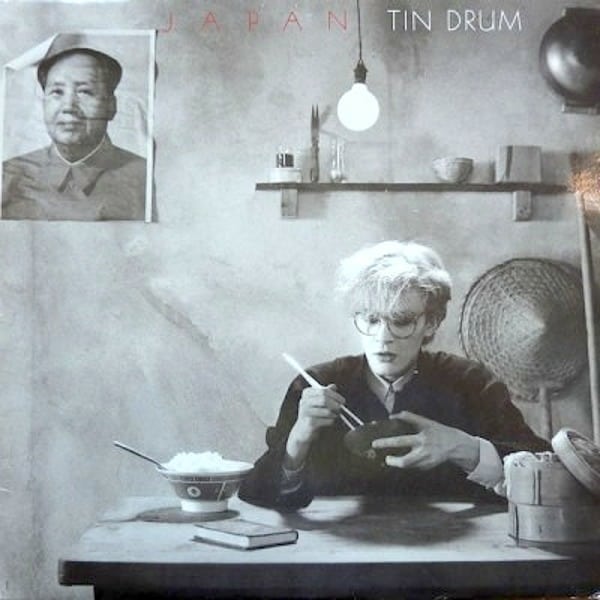 David Sylvian fronted arty-odd-synth-pop-new-wavers Japan originally released their fifth and final album Tin Drum in 1981 through Virgin. This half-speed mastered edition is available as a single LP as per the original, or a 2LP edition cut at 45 RPM for a better noise floor. Includes the singles Ghosts and The Art of Parties, as well as the ever infectious Talking Drum.

It's actually easy to recall how weird Japan were to a 9 year old in 1981. The fact that I was listening to Japan at 9 should really be a cause of celebration for my early experimentalism.  Contrast with the fact that I now listen to Toto and it pretty much says everything about my life. There was a lot about Japan that could confuse a nine year old. Why were these men so pretty? And why did they sound so weird? How in God's name did a track as strange as 'Ghosts' get to number 5 in the charts?

Yet listening to 'Tin Drum' now it doesn't all sound quite as exciting and thrilling as it did back then. Both 'The Art of Parties' and 'Talking Drum' are slabs of rather nondescript early 80s funk stuck somewhere between Talking Heads and Roxy Music with no place to go. Thankfully Japan pushed themselves into really unusual areas for a 1981 era 'new romantic' band. First up 'Canton' is a lovely Eastern instrumental surely influenced by future David Sylvian collaborator Ryuichi Sakamoto. The most obvious 'pop' moment was left right to the end with the rather lovely 'Cantonese Boy' which, like a lot of of Japan's music is enlivened by Mick Karn's stunning rubbery bass line. It contains a chorus of the like you'd rarely see again in the pop charts. Whilst 'Still Life in Mobile Homes' is the moment where they got the blend completely right between their earlier art-rock sound and the more complex musicality they were exploring here.  My favourite piece on the whole LP though is 'Sons of Pioneers'  - a kind of early day post rock piece with Karn's bass leading the way into the kind of atmospheres that had only previously been seen on Brian Eno records. I think of this track as an instrumental but no, Sylvian is there from pretty early in the piece. It's a thrilling work and points the way to their later Rain Tree Crow project.

If you haven't seen anything mindblowing in awhile just watch their performance of 'Ghosts' on Top of the Pops. It's eerie tones, moments of silence and unusual instrumentation have surely never been seen before or since but listened to in hindsight you can hear the plaintive delivery Sylvian would later explore further on his excellent solo albums such as 'Dead Bees on A Cake'.

A word about the pressing. This sounds bloody great. Rich and full, clear as a bell. Worth splashing out for the double LP version if you can spare the cash.

I found this band through the single Ghosts and Japan are the band I still love the most 36 years later. (It was Holger Czukay's work with David Sylvian that led me to discover Can, as well as Yellow Magic Orchestra, Jon Hassell, Giorgio Moroder).

A couple of days after completing their tour of (the country) Japan to support previous album Gentlemen Take Polaroids, they went to see Talking Heads on their Remain in Light tour at the same venue, the Tokyo Budokan, and were obviously impressed. What guitar there is on Tin Drum is in thrall of Talking Heads tour guitarist Adrian Belew (and for their last tour they would recruit guitarist Masami Tsuchiya whose guitar is very like Belew's). But the real takeaway of that Talking Heads influence is on Tin Drum Japan produce a kind of 'Fourth World Music', an idea proposed by Jon Hassell who played on Remain in Light, and would subsequently play on Sylvian's first solo album Brilliant Trees. But where Talking Heads took influences from African music and fused it with their own music to make something new, thus 'Fourth World', Japan took influences from Cantonese Pop music to forge something else new, something completely inauthentic - it is in no way an album of Chinese or Asian music - but new. This album contains only traces of 'rock music' in the form of some Prince-like new wave funk, but it over wise dare I say literally 'post rock'.

At the core of the album are three Chinese pop influenced pieces, Visions of China, Cantonese Boy and Canton. New producer Steve Nye, of the Penguin Cafe Orchestra, strips back everything to spare elements rendered with extreme clarity, organic sounding with a new found concise-ness in the actual compositions.

All the tracks are built on foundation of Steve Jansen's African inflected drums that are often double tracked with either additional playing or pulsing drum machines, and Mick Karn's distinctive fretless bass playing. Over these elements Richard Barbieri and Sylvian programmed a bricolage of ethnological forgeries. Some melody is added by Mick Karn playing a Chinese sorna (double-reeded horn), and of course David Sylvian's vocals, but it is noteworthy that this is a record dominated by rhythm in a way extraordinary at the time. You don't get popular music that like this so much fore-grounds rhythmic elements really until drum and bass in the 90s.

This tendency towards drum and bass minimalism reaches its zenith on the stately and almost glacial Sons of Pioneers. It's perhaps comparable to something from side two of Bowie's Heroes. Then there is Ghosts, Japan's incredibly unlikely hit. An emotionally naked and fragile song about failure and self doubt, which musically blends elements of music concrete with gamelan percussion.

With an average age of less than 23, the glam rock boys from Catford proved themselves as artists and promptly split up, only to return when the success that had alluded them came all at once and persuaded them to do one last tour.