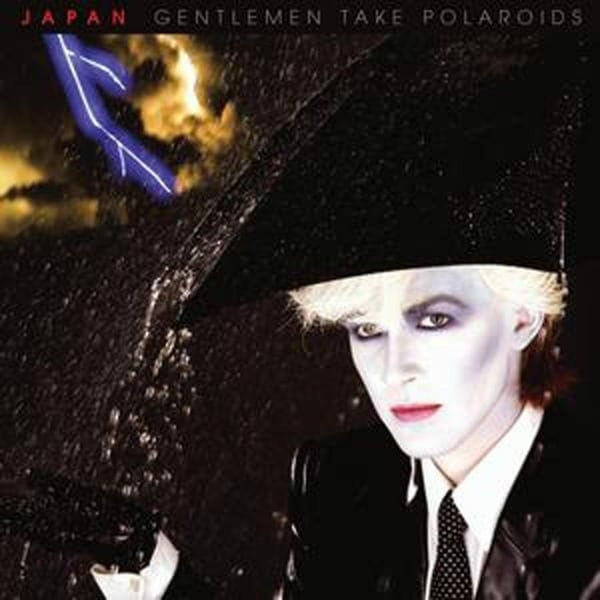 David Sylvian fronted new wave synth-pop outfit Japan’s fourth studio album Gentlemen Take Polaroids was originally released on Virgin in 1980, and was their first album with the label. This half-speed mastered reissue is available as a single LP as per the original, or a 2LP edition cut at 45 RPM. Defining avant-synth-pop in hi-def.

In 1980 it was hard to know what the actual difference between Japan and Roxy Music was. Musically perhaps Mick Karn's fluttering wobbly bass lines added a dose of originality to Japan's music. Looks-wise Sylvian's bouffant was surely way more appealing to the touch than Ferry's lounge lizard quiff. Otherwise there's not a lot to separate them. Both paved the way for the exact sound that Duran Duran who, with a more rambunctious vocalist and more streamlined pretty boy looks,  would take to the masses. Nick Rhodes must thank his lucky stars each day he heard this sound and saw this hair.

So by this point Japan were making elegant sleek pop that was already a mile away from their origins as a kind of glammed up English New York Dolls. The title track is a lovely example of what they were doing which is to take the sound of Roxy Music's stellar 'Same Old Scene' single and run with it. Like the following years 'Tin Drum', 'Gentleman Take Polaroids' is a mixed affair between unhurried clever funk pop and instrumental interludes that hark back to the records Brian Eno was making in the 70s.

Strangely, as Tin Drum was the album I grew up on, I'm perhaps thinking that Gentleman Take Polaroids has more to offer. They are still being clever clogs but they haven't lost the sense of fun that led them to collaborate with Giorgio Moroder. They seem somehow less wankerish. Though I can't explain why they dipped into the Smokey Robinson song book so soon after their relatively successful 'I Second That Emotion'. 'Ain't That Peculiar' is just downright weird. A terrible mismatch. Like 'Tin Drum' there are moments that point forward to Sylvian's solo career. 'Here it's 'Nightporter' a beautiful piano led ballad that is way way above the standard of the rest of the LP.

Japan got better as they started playing fewer instruments and became less cluttery. Their career is like watching a band try to figure things out and by the time they got to where they want to be they'd split up. 'Gentleman Take Polaroids' is a fascinating part of that journey and contains some truly brilliant moments.

I was 17 and seeking new truths when my uncle returned from Scotland in early '81 brandishing 'Gentlemen Take Polaroids', insisting I MUST listen to it... Mind. Blown.

Such depth, beauty, soul, expanse, liberation from self, utterly mesmerising to me. It's still in my top 3 albums of all time, headphones on and I'm transported beyond now. The incessant rhythmic percussive back drop from Steve Jansen is the driving force for a gorgeous poetic melodic rhapsody of vocal gymnastics from deep in the soul of David Sylvian, underpinned by majestic sax and fluid fretless bass from the inimitable Mick Karn, and sensual stylish synth keyboards delivered with aplomb from Richard Barbieri, topped off sparingly with incisive guitar greatness from Rob Dean.

You really should buy this album, it's a classic.

This is the favourite album for the majority of hardcore Japan fans, and in terms of how many times I've listened to it's probably mine in away too. It's greatest strength is that it is simply a lush 40 minutes of music to immerse yourself in. Japan are often dismissed as Roxy Music copyists, and it is true that there are big debts to both Roxy and Bowie. A better comparison for me is their near contemporaries Talk Talk, in particular Talk Talk's Spirit of Eden.

For me I rate it very slightly below Tin Drum and Quiet Life. Both those albums are better collections of songs in my opinion, and were also more responsible for breaking new ground musically. Polaroids builds in Quiet Life and delivers some of Japan's greatest moments: the title track, Swing, and Nightporter in particular. There is also the wonderful collaboration with Ruichi Sakamoto on Taking Islands in Africa, who was in a neighbouring studio recording his B2 Unit album with (among others) Penquin Cafe Orchestra's Steve Nye, who would be brought in produce Japan's next album and undoubted masterpiece Tin Drum.

B2 unit arguably gave the world the first jungle track, produced with the involvement of punk reggae man Dennis Bovell, and in the context of Japan showed the way towards more electronic composition. More ominously for the band Taking Islands in Africa, which was followed the next year by the Sylvian Sakamoto single Bamboo Music (an acknowledged influence on grime music), would illustrate David Sylvian composing music that began to sideline the contribution of the band. (Bass player Mick Karn regarded Taking Islands in Africa as a Sylvian solo track tacked onto a Japan album.)

And it's as a band - the years of rehearsal and playing live -, that Gentlemen Take Polaroids shines most of all for. The band are in incredibly tight and creative unit: a 'third mind' propelled by Steve Jansen's precise drumming, Mick Karn's lopping sliding, talking fretless bass. Richard Barberi really comes into his own providing Eno-like synth and keyboard textures. Guitarist Rob Dean bowed out after this LP, and only plays on four of the eight tracks, but it's these band tracks - the opening Polaroids that segways into Swing on side one, and Methods of Dance that opens side two that are the foundation of why I, and many others, return to this album time and again. Using a ebow (also used by Throbbing Gristle in this era) to create sustained notes that compliment Barbieri's sythn textures, and otherwise doing his Steely Dan inspired restrained best.

Elsewhere on Nightporter the music takes from the minimalist style of mid 20th century Erik Satie. It's a deeply weepy and romantic song, and for fans a moment of brilliance, for the naysayers a bit pretentious. For David Sylvian it's lyrically a first, a direct and emotional song, that contrasts with his more usually obscure and impenetrable lyrics that are more evocative than directly descriptive, and paves the way for their unlikely hit Ghosts.