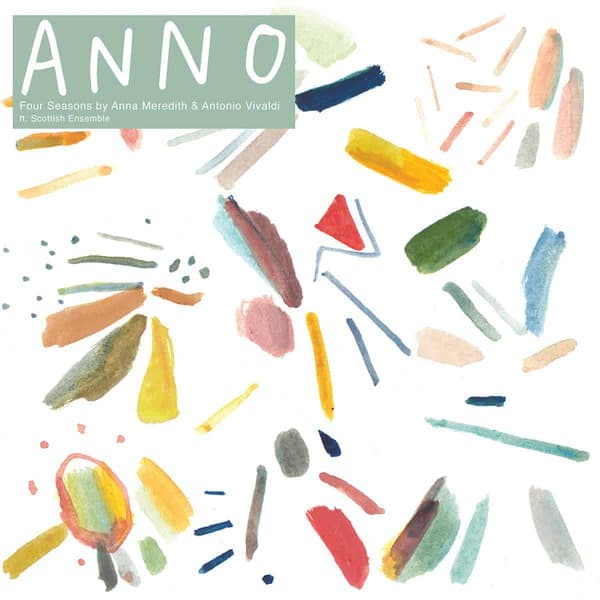 Certainly doing pretty nicely amongst the chattering arts set, thank you very much, Anna Meredith won Scottish Album of the Year award for her debut 'Varmints' and has been artist in residence and sat on panels and all that sort of stuff. Now she releases a new collaboration with the Scottish Ensemble where she intertwines original work with bits from Vivaldi’s Four Seasons.

Anna Meredith is doing pretty well, then; since the release of Varmints (her 2016 debut LP mixed dramatic electronic arrangements with sprightly melodies and ballsy rhythms, which it’s no secret I loved) the restless Anna has garnered quite a few accolades. The appeal of Meredith’s music stretches further than the ‘serious arts’ set, as her no-nonsense yet no less ambitious approach to her music continues to break down the barriers between the Classical and the Pop crowds. Her infectious energy and enthusiasm, plus a not-inconsiderable amount of talent have been key to her success. (Have you seen her audio-visual spectacular ‘Five Telegrams’ as performed at the BBC Proms and shown on the telly, yet? If not, I urge you to seek it out as the light show in its own right was stunning).

So, we move onto the latest Anna Meredith project: a co-mingling of her own compositional style with one of the most famous (and most frequently re-worked) classic in music history: Antonio Vivaldi’s ‘Four Seasons’. It’s well known that Vivaldi’s original four concerti (incidentally composed very nearly 300 years ago) were written for each season of the year, and here Meredith has taken components of each and cleverly interwoven these sections with her own compositions to make one seamless flow of music. Working with the Scottish Ensemble, playing these pieces, has been a kind of revelatory experience for Anna, as their artistic director Jonathan Morton brought the idea to her having noticed parallels in her approach and Vivaldi’s style of work.

The Vivaldi sections will still be highly recognisable (possibly from all those times you’ve been placed on ‘hold’ when ringing your bank or ISP) as the authenticity is close to 100%. It’s Anna’s original work that’s striking though, with some gorgeously elongated violin passages and dramatic builds -- listen to the way Vivaldi’s Spring (subtitled ‘Dawn’ here) segues into ‘Birds’ with its vibratos and birdsong before mixing into the original largo section -- adding new texture and interest to a very familiar piece of music.

It’s more than a simple rearrangement of a few elements in a classic piece, as done previously by the vaunted Max Richter (not that there’s anything wrong with Richter, if that’s what you’re after). I find Meredith’s approach has brought out the dramatic harmonics particularly vividly; the electronic parts are simply stunning -- see ‘Autumn - Bloom’ and ‘Spring - Stoop’ as highlighting examples. Helpfully, the tracks have been marked clearly as being written separately by Meredith and Vivaldi -- so if you don’t like the ‘original’ bits, you can always skip to the maestro as originally intended.

Anna Meredith continues to hold the attention and stimulate the senses. Plus, there’s a ‘binaural’ mix: a relatively recent recording technique that gives the listener a more fully immersive experience, especially on decent headphones.