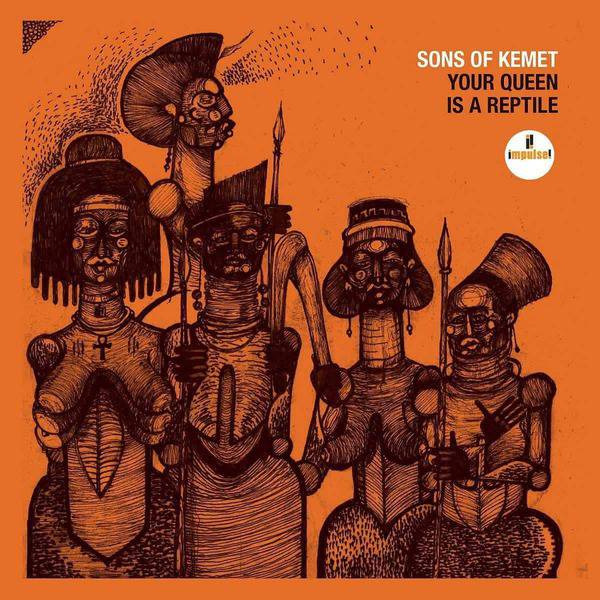 Sons Of Kemet Your Queen Is A Reptile

Sons Of Kemet
'Your Queen Is A Reptile'

Sons Of Kemet return with their third LP of iconoclastic jazz takes. Your Queen Is A Reptile has Shabaka Hutchings and company using sax, tuba and dual-drums to conjure music that sees traditional jazz modes cusping on several sounds of the Caribbean diaspora. Soca, calypso, merengue and more all rumble in the lines of the drum work here, and Hutchings masterfully uses his horn to conduct the proceedings.

Whatever you think of their music, you’ve really got to hand it to Sons of Kemet. That album title is delightfully treasonous and just thinking about the reaction it’d elicit from our awful right wing press if they were to say, win the Mercury Prize, brings a smile to my face. So yeah, Your Queen is a Reptile.

Now that’s out of the way, let’s focus on Shabaka Hutchings’ queens, because this album works as a vital corrective to a history that black women are too often left out of. Ada Eastman was Hutchings’ great-grandmother, Mamie Phipps Clark was sociologist who studied the development of black children, Harriet Tubman was an abolitionist who freed at least 70 slaves, Anna Julia Cooper was an academic and wrote one of the earliest black feminist texts, Angela Davis is an academic and prison abolitionist, Nanny of the Maroons was a folk hero who successfully lead the Maroons against the British, Yaa Asantewaa was the queen of Ejisu who led the war against British colonialism, Albertina Sisulu campaigned against South African apartheid and Doreen Lawrence is the mother of Stephen Lawrence, a teenager murdered by the British police, and campaigned for police reform.

Yes, I know that took a while, but I think the stories of these women are necessary for grasping Sons of Kemet’s intentions. This is an album of rage, but more than that, of remembrance and celebration. And these emotions are communicated excellently by the sheer physicality of the band’s line-up. There is of course Hutchings on the saxophone, but alongside him are a tuba player and two drummers. All three instrument are played with the entire body, and listening to them play you must return the favour, to dance, to sweat. The tuba takes the role of ‘bassist’. Even holding down a rhythm with his massive instrument is more captivating than it would be on a bass guitar. And don’t get me started on the power of twin drumming. Appropriately then, the album shines in its more uptempo moments, ‘..Ada Eastman’ and ‘..Albertina Sisulu’ are mighty party starters. This isn’t to say the more subdued moments aren't great too, ‘..Mamie Phipps Clark’ is a wonderful five minutes of space and dub.

The album closes with ‘..Doreen Lawrence’ which features the repeated sung refrain of “don't wanna hear that racist claptrap, anybody chat that crap get clapped back”. One more lesson from Sons of Kemet.

There's simply are not enough records with prominent tuba. Once you get past Taj Mahal, it's difficult to think of any at all, so with Sons of Kemet rocking a propulsive tuba on each and every track, sort of doing the work you might expect a bass guitar to do, there is reason for all tuba enthusiasts to celebrate. The Queen seemed quite nice and normal when Helen Mirren played her, and Helen Mirren, well she's always worth one isn't she? Maybe Sons of Kemet are right and the queen is really some creepy space alien. Anyway probably the best Caribbean/British jazz record since 'Free Form' by Joe Harriott Quintet.

Excellent album, even better than the last two. Feels like the sound and rhythm play have been developed further, with more purpose. Some ridiculously catchy songs and plenty of depth for repeat listens.