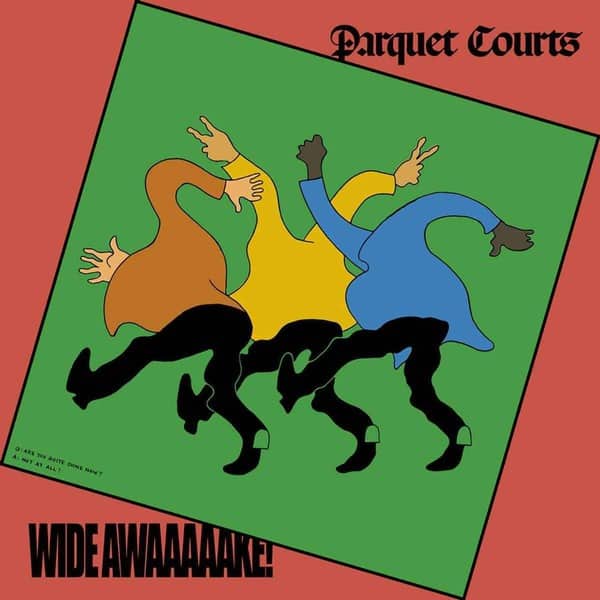 Here they come again with their fifth album which is produced by none other than Danger Mouse. This is another bold and groundbreaking work that benefits from full band arrangements with the group playing with their usual true punk rock passion. More confident with each release this is set to be their biggest missive yet.

Staff note from Clinton:
Oh I don't know about this. Wrong time of day? Maybe in a sweaty underground sweat-bar where you can dance to some pulverising rhythms it might sound very different but at 9.40 on a Wednesday morning it just annoyed me. They don't stick to one style (not necessarily a bad thing) but Parquet Courts seem to have stopped writing melodies. So annoying I had to turn it off.

Please note that Wide Awake! (CD RT0001CD) by Parquet Courts is not currently in stock.

I’m sure you’re aware of the form by now. With an energy best described as subliminal, thee Parquet Courts sit you in a seminar room and have you debate whether or not they’re chill and slack or bold and bracing. I can never quite tell, but I’d argue ‘Human Performance’ was their best record to date, a jangling head-scratch of rock songs about domestication and homebody living. This new stay-at-home model suited the Courts: on that record you could see the apartment stairwells and unwashed dish towers, the band fully realising themselves as songwriters underneath the usual bait-and-switch riff raff.

While “Wide Awake!’ isn’t about the same things, it wants after the same energy: a stop-start juggernaut that presents their irony as sincerity and vice versa, squishing them together like sitcom characters forced to deal with each other. The record’s opener, the gloriously titled “Total Football”, contains plenty of Cruyff Turns, the guitars chugging and dashing and ushering scene changes back and forth. “Violence” is unabashedly political, engaging Parquet Courts in a world they’ve long looked at with irreverence: a spoken word denouement is spat out by Andrew Savage over a silly keyboard theme and a fret-slick chord chug. It has the kind of restless energy of “The Revolution Will Not Be Televised”, positing aghast shouts against affirming backing vocals and whimsical pitch shifted vocals that say something sinister and important underneath: that violence is, at this point, a cultural omnipresence.

Whew. Apologies for rambling about “Violence”, but it’s easily their best song ever. It’d be easy to accuse Parquet Courts of being autopilot with their music at this point, so versed in their singular aesthetic they need not focus in on it. And yet… what they’re doing stil reeks of progression, of trying harder to push their sound into meanings it’s never known. “Merdi Gras Beads” is a gorgeous, lush tune, dipping their gnarly sound in an aquarium tank. “Freebird II” reframes their approach to hooks, its dinky keyboard melody singing as the guitars lay down what feels like a backing bit. The record’s title track, “Wide Awake”, is a blissful dance tune in the vein of Talking Heads, its tinkering cowbell percussion seeing them fully embrace euphoria without reservation. If you can believe it.

It’s a big old shrug of a record, on first take: when does a Parquet Courts ever not sound like a Parquet Courts record? Only as you reach the end do you realise how much work has gone into making this its own singular experience, how open they sound to something new. I've never once been a believer in this band, but when that choir bigs them up on "Death Will Bring Change", I realise I should too.