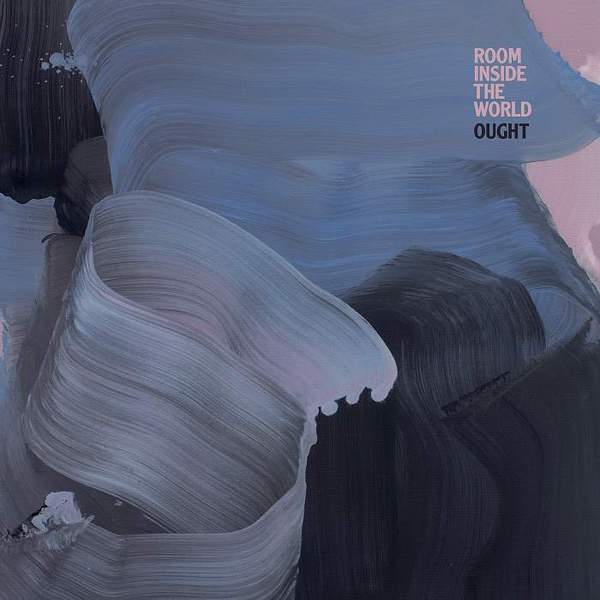 Ought Room Inside the World

Ought
'Room Inside the World'

For their third album, Room Inside The World, Canada’s Ought have allowed previously alien elements into their tight post punk sound. Here, frontman Tim Darcy’s aping of Ian Curtis, and the spiky guitars and frantic drums are interspersed with the obligatory vibraphone, synths, drum machines and a 70-piece choir that bands apply when they get a bit of coin behind them. Will it spoil the brilliant sound of before? Time will tell though the band haven’t mellowed out, maybe things may have just got a whole lot more interesting? We doubt it.

In 2015 I had one wish, and it was that the band Ought would release one record per year, with each one largely sounding the same as the last, ad nauseum, forever and all time. Such was the power of those first two Ought records. They needed not be entirely new -- drawing on the schematics of David Byrne, Mark E. Smith and a portion of Slint -- as long as they were this brilliant, this emphatic, this soul-shaking. “Beautiful Blue Skies” will stand as the signature moment of what is now an era in Ought’s career -- with jangled guitars and scrambled noise energy, it made a double rainbow out of mundanity. Bringing their listener up. Out of nothing. Into something.

2016 came around and I did not get my wish; in 2018, I’m not getting it all over again. Tim Darcy and his Ought have no interest whatsoever in being a reliable, hook-heavy favourite band. As much could have been evidenced on Darcy’s solo record, ‘Saturday Night’, in which he started out like the Velvets before sinking his ship into a paranormal ether of weird experimentalism. On ‘Room Inside the World’, he continues to tinker, offering half a record of glitzier, Smiths-ier synth post-punk before delving into unprecedented miasmas. At first, I despised every moment of it -- now, having completed my adjustment period for Darcy’s new affectations, I can see a new and good Ought emerging.

Darcy’s performance still does it for me, and from within the rubble of my favourite band, that’s what counts first: his differently pointed voice might be a head-scratcher, but he can still reel off colourful lines like “I was a doctor, rooting for pain”. And so too can he swing a filler phrase -- an utterance or exhale -- into significance. “What if I told ya, what if I say?” he sings, at one point, converting his hum into a groan before the tune rises into its mix of keyboard chords and fuzzy guitar. On the record’s annoyingly good synth pop single “These 3 Things”, he oompfs and umpfs this squeaky-clean song into something more estranged.

There are moments where Ought have changed for the worse, if we’re judging them relative to the Ought standard -- the guitar solo on “These 3 Things” is so clunky you wonder if Darcy ever played a note before, especially when you can hear him dragging and stretching his strings with the same energy as before on the breakdown to “Disaffection”. There are songs, such as closer “Alice”, that feel formless, breaking up my favourite thing about ‘Sun Coming Down’ -- its ability to drive forward and keep its form in tact.

And yet… there are moments I’d never have expected Ought to pull off. There’s “Desire”, which sounds nothing like a Darcy song and yet could certainly be his best. It grows out of the kind of post-punk warble Eagulls leaned into on their last record -- hurling up its sorrow -- before revealing a second passage of languishing synth chords, sombre horns and lovely backing vocals. Here they are, and how: Darcy’s very own Greek chorus, here to help him when he feels he can’t be the inspiring teacher we all want him to be. These intricate, introspective moments feel unprecedented for this band -- the guitar bit in “Desire” can suck if it gives me something this unfathomably personal.

I’ve barely cracked the second half of this record yet -- it’s a wild, meandering trip that brings together easy-as-pie melodies and structures and just as happily collapses them. I’m writing you this super long, annoying essay to say that in 2018, an Ought album's gonna be a grower, and that's actually okay.

Imagine if you will that after More Songs About Buildings and Food, Talking Heads came up with an album that sat somewhere between A Flock of Seagulls self titled debut and the later, lesser work of the Associates. That's pretty much what has happened with this third Ought album following their two inspired art rock albums on Constellation. It's not terrible music, it's passable albeit with some rather dull passages. But everything once so vital and fresh about the band has been sandpapered off....and Tim Darcy's distinctive voice has changed beyond almost all recognition. They now sound less like Ought and more like...well...anyone.