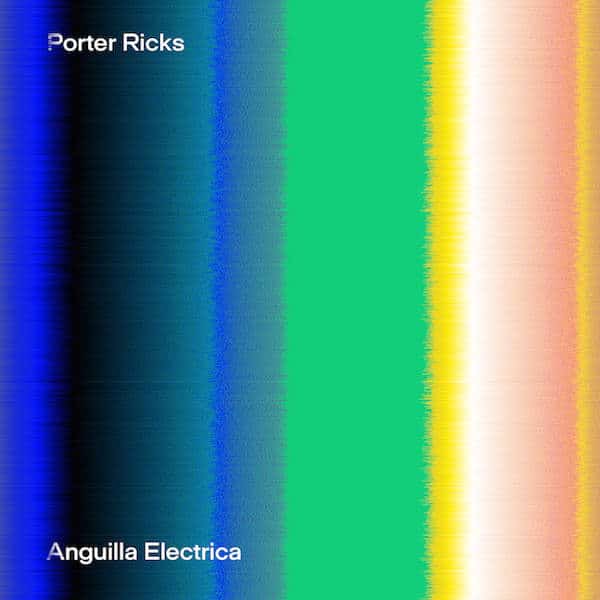 I used to think nautical German techno was all about U96 - Das Boot. Then I switched to Porter Ricks. I’ve waited seventeen years for this record, and so to celebrate, I’ve climbed into my wetsuit, ripped open a packet of prawn cocktail flavour crisps and put my Finding Nemo DVD on with the volume muted. Let’s dive in…

So generally speaking, if you copped the ‘Shadow Boat’ EP that came out late 2016, you’ll have a good idea of where Thomas Köner and Andy Mellwig are currently at sonically - that is one foot in the past, the other firmly in the present. Obviously, in 2017, taking into account the time that has elapsed since their early releases on Chain Reaction and the work of folks that have been inspired by their sound, a Porter Ricks album that doesn’t wholly re-invent their sound isn’t going to have quite the same impact as their early work. Yet the record does hold a certain magic and finesse that makes ‘Anguilla Electrica’ totally satisfying.

The title cut that opens, immediately plunges us deep into murky waters, creating a palpable sense of paranoia at the thought of discovering what lurks beneath. I’m half expecting a Great White Shark to to rip out of the speaker and chomp my puny little legs off. Having said that, it’s pretty damn groovy too - perfectly tooled for a dark dancefloor, almost blinded by dry ice vapour and flickering strobe light with gnarly low end, plenty of nifty panning and a stomper of kick drum driving it along. It certainly has the sweaty EBM compatible sound that’s currently in vogue within a lot of contemporary techno.
‘Shoal Beat’ takes us deeper still - with all the glorious shimmering and reverberating the duo do so elegantly. It’s an almost overwhelmingly dense, full-spectrum, multi-layered sound, with huge throbbing low end and tactile crisper top end. It becomes difficult to focus on a single element or loop as things appear to be constantly morphing, yet rhythmically locked down - you just have to let it sweep you away as a whole.
The cavernous ‘Prismatic Error’ is grade A, mysterious, electronic dub bliss. The sheer weight of the heavy subs feel like they’re literally dragging me down - sinking, while the crackling higher frequencies are like parts of me dissolving and floating to the surface - a physical sensation of being pulled apart by sound.

The peculiar, unnerving ‘Scuba Rondo’ is anchored by skeletal drums, little more than the pulse of a kick drum, ticking hi-hat and throbbing bass. The sensation like swimming over a decaying ship wreck and feeling the vibrations of subsonic whale calls. There’s something of an unpleasant, claustrophobic/drowning vibe - like the need to come to the surface for air.
‘Port of Tangency’ is brighter in colour, as though approaching a destination, and has a more standard Berlin Dub Techno / Chain Reaction / Basic Channel framework - on which they paint dynamic slivers of blue light, dissolving metal and bubbling subs.
We finally reach the shore on ‘Sandy Ground’ where sunlight refracts off of crystal sands. Again, purely functional drums are the foundation for immensely intricate granular static, gurgling, infinite bubble trails and glowing synth that’s like blinding sunlight as we come to the surface.

As with the preceding EP on Tresor - there’s a real sense that painstaking work has been put into the detail of these productions -- updating the blueprint of their sound, while retaining its original character and appeal.