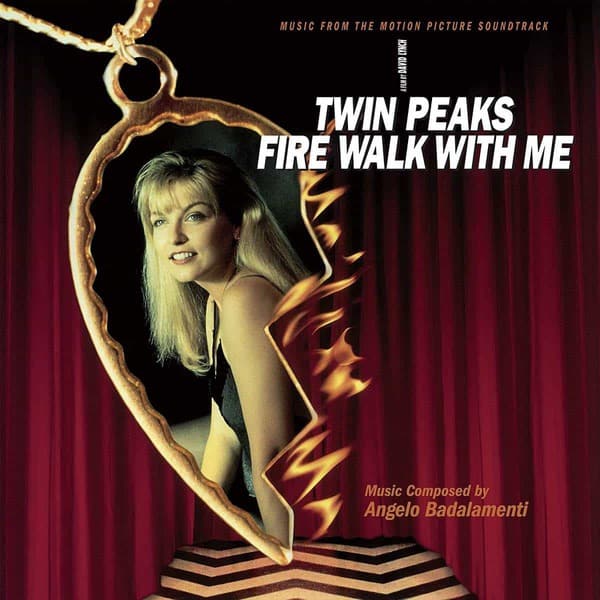 Can’t go wrong with this deeply classic soundtrack work from Angelo Badalamenti can you? David Lynch’s Twin Peaks spin-off film Fire Walk With Me features variations on the series’ key themes, plus new music and appearances from Julee Cruise and Thought Gang, which is Badalamenti’s musical project with Lynch. Vinyl reissue from Warner Bros.

Twin Peaks – Fire Walk With Me by Angelo Badalamenti 2 reviews. Write a review for us »

Twin Peaks was a groundbreaking TV show, unlike anything that had come before. It wasn't just the world Lynch created, but the way it was made. Shot on film with production values more akin to cinema than TV. And part of what made it so special was the music. Without the contribution of Angelo, Twin Peaks would not be Twin Peaks; he scored the tension, the fight between light and dark, the characters and the whole good-dam town.

Fire Walk With Me was the film that followed. And whilst co-creator Frost didn't want to collaborate on the film, which in part led to a much darker tone, longtime Lynch collaborator Badalamenti was on hand once again to provide the score.

Whilst many of the tracks could easily have appeared in the show, there are several standouts which seem to reflect this darker tone perfectly. The opening theme itself just oozes dread and sorrow. "The Pink Room" is chaotic and raw, yet seemingly effortless. "The Black Dog Runs At Night" with it's repetitive call pulls you in, increasingly claustrophobic as it runs its course.

For contrast, there is the melt inducing "Moving Through Time", positively dreamy. "Questions In A World Of Blue" is simply the best Julie Cruise contribution to the world of Twin Peaks. Personally, "A Real Indication" tops it off though, a scatty shuffle layered with the most wonderful lyrics sung by Badalamenti himself.

And to top it all off. The whole recording is mastered with magical production and stunning musicianship. A lusciously wide soundstage and fantastic dynamics make it all shine.

It should be noted, there is also the Death Waltz/Mondo "special" release. The latter comes in a stunning package, and you would think spread over two records as apposed to (as here) one record would sound better. But whoever was involved in cutting that needs there ears tested, as it's an inferior product in every way. Save your money and get this release (with the original sleeve design) instead.

I don't see how I can give this anything less than a 10. It really is perfection. Sure, there are tracks in the film not found here, but just shy of an hour long, you're not shortchanged. Put it on, close your eyes and be transported.

Dale Cooper — 'I have no idea where this will lead us, but I have a definite feeling it will be a place both wonderful and strange.'