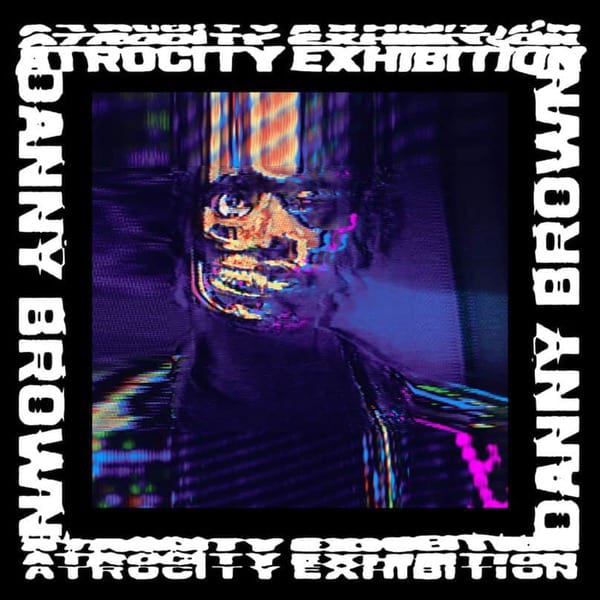 The new Danny Brown lands on Warp Records. Atrocity Exhibition is his third full-length, and it pulls no punches at all. Guest producers include Evian Christ and Black Milk, and guest vocalists include Kelela, Earl Sweatshirt and Kendrick Lamar. Heavyweight line-up eh? CD and double vinyl editions on Warp.

On ‘Atrocity Exhibition’, Danny Brown’s a fucking mess. “Kubrick with two bricks”, he says, and his album makes it so: his tunes are shot through an existentialism so plain you could hear Tony Soprano listening to it as his whole world cuts to black, so real Ballard should come back to life and name his novel after this album. “Never know” is the record’s mantra -- specifically, it’s the hook that drives “Today”: “Ya never really know when it’s time to go”. The record gives hints of the chaos that comes when you’re fixating on your existential gruel, spending your time too scared to talk to people and way too scared to be alone (“Phone keep ringing but I cut that shit off / Only time I use it when I tell the dealer drop it off / Had a threesome last night, ain’t matter what it cost”).

From there, his hooks are written for the peculiar and uncanny, blasted with noise, discordance and sharpness in the hope that angst answers questions: “Ain’t it funny how it happens?”, he belts through the furiously produced “Ain’t It Funny”, as if asking by asking a rhetorical question really fast he’ll trick it into answering. It’s a record of rubble searching: it opens on twangy bass a la a world-wearied Tom Waits and pushes into samples lost in every direction. “Golddust” feels like an EDM song dropping off and flatlining, Danny’s lines coming like a hurried CPR.

Obsessed with making an album that counterbalances his brilliantly crooked flow with as many different musical styles as possible, he makes R&B exhibitions (“Living Like a Rolling Stone”, with its grooving bass and sighing Petite Noir hook), heart emoji cloud rap (“Get-Hi”, whose beat he all but disregards) and weird prog-classical experiments (fucking seriously, though: “Hell for It” literally sounds like it’s using a Hauschka track for its piano-looped beat). It's a disorienting trip, though, but it becomes euphoric in its daze, far more powerful than ‘Old’ for its lightning speed approach to writing both serious and silly. It's packed with big-hitters, if you can believe it: “Really Doe” is essentially an exercise in for four incredible rappers, brilliantly centred by Kendrick thinking he’s on a different album. “Dance In The Water” simply sounds like the perfect single, switching choice lines and an ominous production with an almost industrial intensity.

What I'll stick around for, though, is the almost psychedelic journey this record takes in its search for emotional satisfaction. It sounds like someone tearing pages out of comic books.