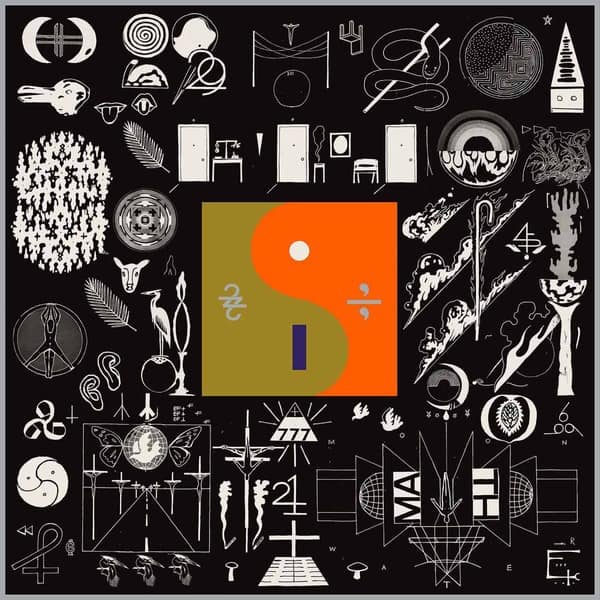 That isolated cabin in the woods feels a long way away now: Justin Vernon’s Bon Iver seem to have made new album 22, A Million in a cabin in the internet instead. Lots of auto-tune, lo-fi crunch next to high-fi shimmer, and track titles to trump any vaporwave you could throw at it. Take your pick of CD, cassette tape or vinyl editions: there is even a deluxe LP edition with a bonus 12” of extended versions. On Jagjaguwar

Since releasing a masterful folk rock record that flowed through state borders and into the landscape, seamlessly bridging each ripple, he’s been largely silent on himself, doing for and unto others. He’s been in Kanye’s tunes and on his stages, helped out James Blake and become, all things considered, something of a collector’s brand -- listen to Chance’s new mixtape and you’ll hear an identical-but-not Bon Iver in Francis and the Lights wailing up through the octaves on “Summer Friends”, almost reducing him to a little patched effect. We know Vernon’s voice well, just not what he’s gonna choose to do with it next.

Well, here it is, splotchy and spellbinding. Having gained an affection for samples, malfunctions and loops, he’s creating a record of broken beauty, chock full of dumbass vaporwave track titles, finecky crackle and autotuned harmonies. Vernon’s lucky to have his eyes open to more circles than one, making music that owes as much to particular rap production, ambient and his songwriter roots of old. Some tunes on this record reach the aforementioned noise-pop flurry of Ian William Craig, rewiring distortion, cut up voices and gorgeous accidental sounds ‘til all that’s left is a beautiful broken circle. Some of them bridge this new, meandering style with grandiose rock affectations, such as “33 “GOD””, whose strands of beatlessness and pummeling drums ‘scape the sound ‘til it’s as big as Coldplay. Others are what folk songs might sound like as pure anachronism. Hashtagged but acoustically picked, “#Stafford APTS” references traditionals with a countrified vocal a la Hank Williams alongside slight virtual upgrades and some distant saxofon.

My favourite thing about this record, though, is the strange little argument it's  having with itself about whether it’s a serious body of work or a bit of humour. It’s not funny, but our Bon knows it is silly, what he’s doing to all this serenity and beauty, from the scratchy chipmunk voices on the opening track to the Anticon-esque mumbles on “GOD”, brought to life with Bon’s high-pitched request of supreme earnesty: “I’d be happy as hell if you stayed for tea”. The abrupt swathes of vocal on the string-droned, Sufjan-synthed, noise-panicked “Moon Water” are replaced with near-robotic stutters as the track loses itself completely, transferring into “8” on the back of a free-sax noodle and some conversely serene new age chords. In its constantly changing mood, between surrealist journey and lonely meditation, ‘22, A Million’ feels largely defined by its mangled aesthetic.

We'll see if it holds up, but for now, I'm having a real nice time, crying on the internet, with Justin Vernon.

10 years ago, Justin Vernon (or Bon Iver as he’s more commonly known) was recording his debut album at his father’s hunting cabin in the woods of Wisconsin. Today, Bon Iver has ditched the folky styles of his first two albums and has opted for electronics. 22, A Million may appear at first to be a bold example of that career cliché ‘The difficult third record’, but once you start decoding the sounds (as well as the artwork and even the song titles themselves) do you start to realise just how intricate and compelling the sound and themes are on this album. Its new electronic/hip-hop influenced direction simultaneously pushes away the audience and then pulls them back in again. Not only does it confirm to us all that Justin Vernon is a visionary of modern folk, but it has also set the new standard for experimentation in alternative music.