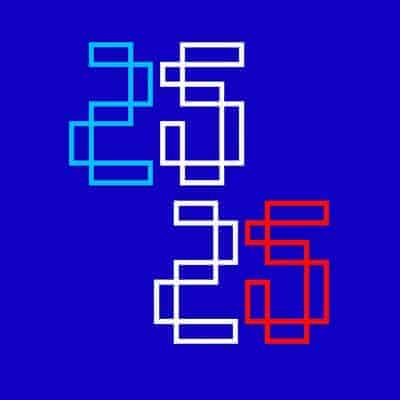 Eagerly-awaited second full-length album from Factory Floor, now operating as a duo. 25 25 continues the group’s journey straight to the heart of the dancefloor, with a tightly stripped-down, boldly minimal approach. Synths and drums and vocals alike are strictly controlled for maximum industrial efficiency. CD or double LP edition on DFA.

Reading reviews for ‘25 25’ so far, it feels like Factory Floor are losing what cred their switch to sparsity afforded them. Maybe it’s because things have moved on since their retro smash hit s/t, whose jams packed trancing industrial fever forever and ever. Or because people think this record is just, you know, too similar, more, again. Or is it just that people can’t catch their breath and they’d quite like to? Whatever the case, it’s time Factory Floor lawyered up, hired me and got their defense on the line.

The muted reactions aren’t a surprise: it’s because this record packs behind-the-scenes nuances. Once again super hardwired, and continuing the band’s devotion to extreme minimalism, this record is something of a maintain and refine job: it doesn’t add anything significant to their sound on the surface, and in fact it seems to reduce the potential hits a la “Fall Back” -- instead, the band try and make exponential gains on their trancey, gloriously hypnotic sound. A tune like “Slow Listen” is the best example, its shaken beat and gulping bassline only accosted by equally numbing snares and a blurred vocal -- with its straight-line mode and its occasional trinkets of percussive sound, it gives Nisennenmondai a run for their money.

What Factory Floor seem to have done with ‘25 25’ is almost quietened their sounds: the beats throb far less, the synths aren’t as attacking and the vocals simmer under rather than over. As lovers of subtle, cerebral dance, of thoroughly taming synthesizer mayhem, this record does everything it wants to. Consider “Dial Me In”, the volume-raised, heat-mapped banger of the record, a bit of lip service: with its booming, cascading beats and club-ready synthline, it sounds like “Fall Back” on the wrong record. This record is great: for the most part, I’d like to listen to it at my desk rather than out live, and that’s absolutely fine.