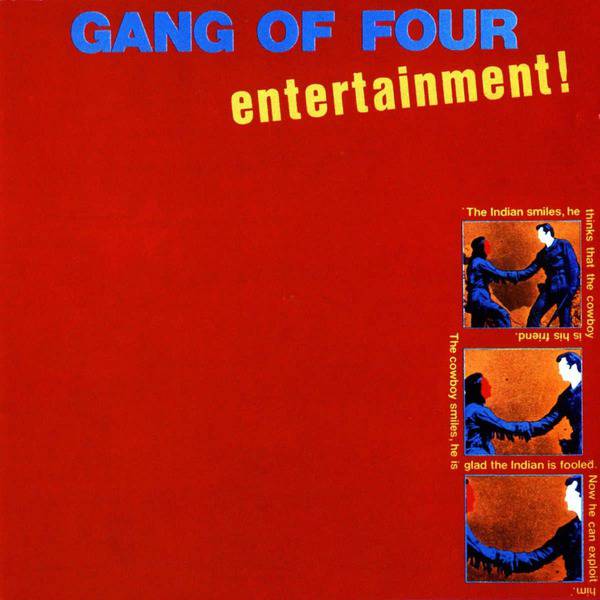 Entertainment was the the debut album by Leeds post-punk band Gang Of Four. It was originally released in 1979. The band incorporated elements of funk, dub and reggae into their choppy and angular punk sound. Features the tracks Damaged Goods, At Home He's A Tourist and I Found That Essence Rare.

Entertainment! by Gang of Four 3 reviews. Write a review for us »

The promoters of this gig were real shady like and wanted the millions of pounds this gig would get them and didn't want to cancel it.

Luckily there was this group of bricklayers round the corner and the promoters got hold of them and played them Pink Flag from an 8 Track tape.

'What's this shit?' said one of the brickies who was obviously called Dave.

'Can you pretend to play this?' said the promoter.

'Fuck off' said another brickie who was obviously called Phil.

'No probs Guv' said Wayne who was the gaffer.

So they pretended to be Wire and managed to get by. The crowd of Londoners watching the gig were a mixture of people mashed off their heads on 'scrumpy' or hipsters on unicycles so they didn't notice.

Luckily Steve Albini was driving past in an ice cream van and managed to record the gig on a tape. He knew music and knew this 'Gang of Four' were not Wire. He put the cassette into his magic box with electric stuff in and made it sound like it was crafted by the Gods instead of some bricklayers from Dagenham.

He released it as a bootleg and took his name off it because he is all cool and shit.

This is that record.

The brickies heard what they had done.

And they did. And the world realised that they were not in fact Wire but a bunch of tradesmen that got lucky.

This record still exists though and it is immense. If you don't like music buy it anyhow just as a lesson to know your place in the world.

You are not in Wire.