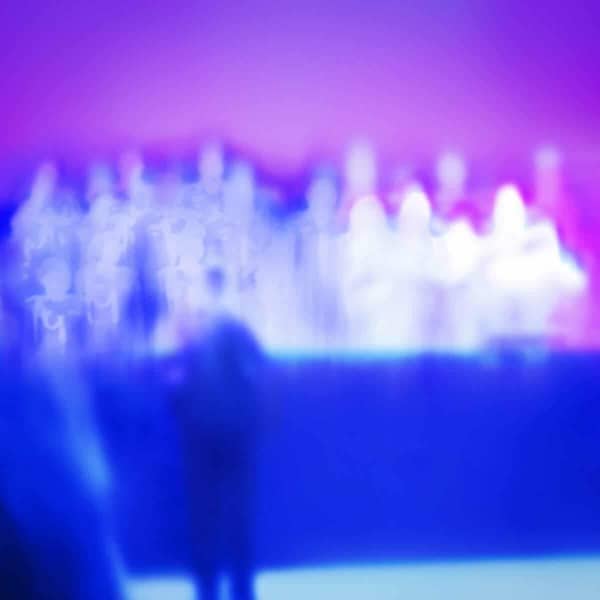 Brand new full-length from Tim Hecker, who here brings his flaring waves of electronics into contact with woodwinds and the Icelandic Choir Ensemble (as arranged by Johann Johannsson). Love Streams builds on previous album Virgins, and was partly recorded in the same Reykjavik studio. CD or double LP on 4AD.

Here he is. The man of the hour, the one who said a nervous ‘hi’ to me at Belgrave before disappearing behind a thick wall of dry ice. The one who loves streams so much that there isn’t a stream for this in sight. The one who silently accepts that one of the 4AD fools (citation needed) has ruined the surprise by letting the whole thing out early. The one who has paved the way for heavy, misty, broken ambient collages to consume all of our lives.

But there’s a change in Hecker here. I’m not sure if signing to 4AD is the cause or effect of this change, but this time round he’s actually clean. Well, that’s always relatively speaking with Tim Hecker, but the usual smudged, misty distortion wastelands are confined to small pockets of Love Streams, which is just as well because another Ravedeath would have caused most of his fans to give up on life, leaving him with no listeners at all. The usual Hecker imagery is conjured in your mind’s eye; the ancient crumbling marble statues covered in mossy decay are still here, but the moss has been scrubbed off to display a clear shining white surface, glossy as the many synths that emblazon this LP. But the faces of the statues are still fractured, all angular and inhuman, their fragments reassembling into sliced sequences that are totally dominating. If you want an actual example rather than vague whimsicalities, give ‘Violet Monumental I’ and ‘Music of the Air’ a listen, the latter providing some serious flawed beauty through cyclic synth tumbles and thick bass drones. They both provide beautiful chopped vocal segments, sung by the Icelandic Choir Ensemble and arranged by OST with the mOST Johann Johannsson.

Let me just say that ‘Bijie Dream’s harmonic cascades are some of the best sound things I’ve heard for a long time. I’m breaking down.

Let’s also talk about Kara-Lis Coverdale, shall we? I always wondered who fumbled with the synths on Virgins, and now that I’ve heard more of her stuff including crazy synth explorations and vocal retexturing, I’d have to say that she must have had a large part to play on this album, if only for the quantity of delicious synth. Almost too large a part for it to be considered a solo effort, but I think Coverdale has been Hecker’s apprentice for a while now so it’s impossible to tell who is who at this stage. They’ve only gone and merged. Anyway, her shapeshifting layers are much appreciated. Next record will be by Kara-Lis Hecker, right?

It is the clarity of texture on this that is so damn refreshing, and exactly what Tim Hecker (& co!) needed to do to his sound, bring it all out into the open to be the grandiose, shiny, dreamy technicolour masterpiece that this is. And for that, Mr Hecker, you get the only 10 I’ve ever given to anything at NR.