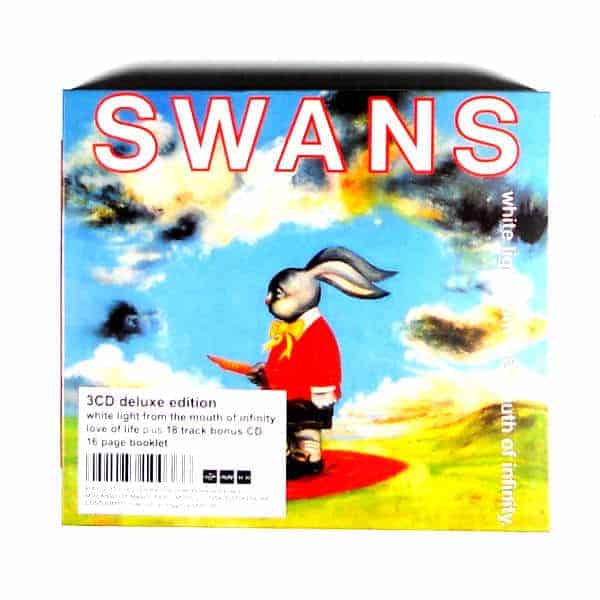 SWANS White Light from the Mouth of Infinity / Love of Life

SWANS
'White Light from the Mouth of Infinity / Love of Life'

Swans are an American experimental rock who had their origins in the New York No Wave scene of the early ‘80s. They are fronted by multi-instrumentalist Michael Gira. White Light From The Mouth of Infinity and Love of Life are two of their classic albums from their early ‘90s period. Both complete albums are presented here as a box set available on CD and Vinyl, both versions come with an 18 track CD of bonus material.

Swans. Yes. I’d love to just type out For the love of life! For The love of life! For the love of life! ad nauseum until this review fully resembles the repetitive, locked-door shenanigans of Michael Gira’s brain, but some level of analysis has been requested, so I’ll give it a go. Since their second inception as a band of aspirational, old-hat dudes (who actually wear hats), Swans have been sacrificing themselves with two-plus hours of palatable but challenging noise rawk that sounds something like a whale expelling air through its blowhole every five minutes. On spec, you wouldn’t know it’s the same band as the one that used to make rather crystalline, rather moody and, above all, rather traditional post-punk.

That era did happen, and it came in the double-barrelled manifesto of ‘Love of Life’ and ‘White Light From The Mouth of Infinity’, two records based around Gira’s more pantomimic but equally intense songwriting style. Offering a midpoint between the cruel heaviness of the Swans albums either side of it and the soft twang of Angels of Light, these records feel special. Title track “Love of Life” alone is a melodic and rhythmically pulsating track that moves faster than any new-era Swans song, pouncing on a singular lyrical mantra and weaving sweet guitars, vocal harmonies and distanced feral screams around it. The record continues to sound like a theatrical cabaret throughout, with haunting string sounds and a shimmering set of drum tricks being underpinned by precious melodies and rather uplifting choruses.

With Jarboe still an integral force in the band at this point, there was a strong duality in the sound of Swans, as if this was a collaborative story with a constantly developing narrative. “The Other Side of the World” is textured like the rest of the record, but its twinkling, Waterboys-esque piano underpins the dirgy guitar and overloud drums, as if suggesting the secret positivity hiding in the hopeless Swans project.

You can’t take the evil out of Michael Gira, though, and the opening sounds of ‘White Light’ prove that -- a crying baby plays back to back with a howling percussive intro that leads into progged-up flutes and a Goblin-level appreciation of synth, before the baritone comes in to announce: “I’m better than you”. And yet… there’s always a major moment, a switch-up where the key becomes jubilant, a harmony breathes in like a spot of fresh air -- if only for a second.

Where ‘Love of Life’ sounds like a pure, singular post-punk document, ‘White Light’ seems to hint at the band’s cataclysmic future, shaking a stick at the desperation and grandiosity while keeping the same driving rhythms and old-school Swans’ transgressions. Caught between two styles, ‘White Light’ comes out sounding like the band’s busiest, most passionate moment. For life's sake, I love it.