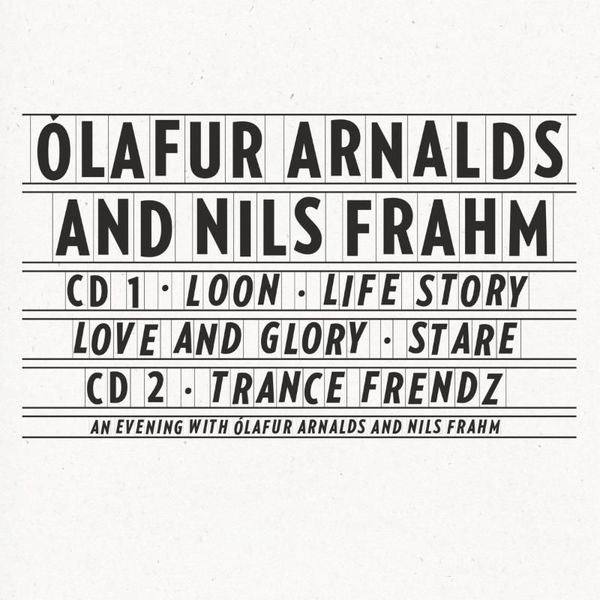 Olafur Arnalds and Nils Frahm are each highly regarded as indie-classical melodic experimentalists, and with good cause. They’ve also been working together for years, and this Collaborative Works set gathers up all their past EPs, along with Trance Frendz, a new set of studio improvisations. Double CD on Erased Tapes.

This is a compilation of the 'Loon', 'Stare' and 'Life Story Love and Glory' releases plus some new stuff. As we've already reviewed two of them, we've just lazily pasted the reviews below and used the mean as a score.

On Loon, ol-buddy-ol-pals Olafur Arnalds and Nils Frahm take a break from celebrating piano day/year, using the fat stacks gained from the last 7” to splash out on some new synths. Woohoo! New stuff! Knobs! Except that this was made a year ago now, so they’re probably gathering dust while being crushed under the weight of a mini grand. U guyz.

The pieces here are all suitably emotional electronic miniatures, featuring some very melodic synth use, none of that abstract noise nonsense. 2nd track ‘Three’ is a hazy wall of more or less a single chord, a blissful one at that, with some simple repetitive clicking and throbbing moving it forward. Next track ‘Wide Open’ sees Frahm & Arnalds doing their best impression of labelmate Rival Consoles, albeit less daring and more desolate. The harmonic progression is nice but they could have done something better production-wise, especially when they’re encroaching on the territory of a fledgling electronic master. Let’s see what the B has to say. A deep arp akin to Raica’s ‘Tiwie’ kicks off what becomes a minimal techno tune - I forget that they’ve kinda got that in common. They start to get evocative again with those chords (are they the same ones every time?) but it doesn’t really develop much… Same goes for the even slower final track, I mean, the sounds are quite nice but there’s a lot missing, evolution, subtle complexity, etc.

It’s all good to stay calm all the time, but if you’re venturing into the world of beats, you’ve got to watch yourself, because the calm beat world is hard to keep apart from the calm boredom world. That being said there’s some nice stuff on here, particularly the first side, and fans of the two and associated projects will be right at home in their gentle embrace.

This is a dream pairing for you neo classical types. The Laurel & Hardy of all things neo classical come together for a very special limited release just for record store day. You should read the (very long...) press release for this. It's a fascinating story of veggie pizza, falafel and analogue synths (surely 3 of any rational human beings favourite things?). For those who can't be arsed it basically explains the story of how this record came about and that's pretty much it. Note this isn't a split 10”... It's a collaboration between the 2 artists and if you're expecting a massive tinklefest then you may as well go home now. 'Stare' sees Abbott & Costello on a more analogue synth route. The pearl of the EP is the epic track B1 with it's cyclical electronic microbeat before some ominous misery strings come in and create an almost perfect combination of neo classical and electronics. If I used the words fucking gorgeous it'd be an understatement. It's not a million miles away from the kind of electronics and classical music Max Richter was doing around the Blue Notebooks era. Anyway I could listen to this all day as it's wonderful. I did listen to the A side but I got totally sidetracked. Sorry.