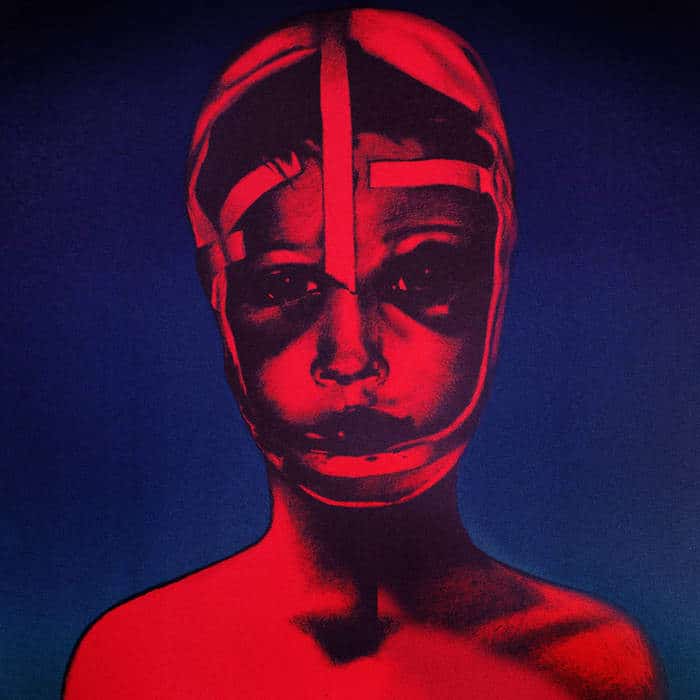 Whenever I’m in a city and walk past one of those hairdressers called Regis, I get flashbacks of halcyon days in the mid 90’s dancing like a lunatic to Karl O'Connor's early Downwards productions. Of course his namesake isn't actually a chain of hair salon’s, but that of late 70’s early 80’s West Bromwich and Albion football hero Cyrille Regis. For the uninitiated this man is/ was 50% of British Murder Boys along with Surgeon, founder of the Downwards label, was part of the sorely missed Sandwell District collective and is also behind aliases such as CUB, Ugandan Speed Trials, Public Information Film, Your Health, Sandra Electronics (with Juan Mendez/ Silent Servant) and Concrete Fence (with Russell Haswell) plus probably more I can’t remember.

For ‘Manbait’ Blackest Ever Black pull together a bunch of Regis material that’s been scattered across the label (plus additional goodies). Some of which has been previously written about  on these very pages. It’s not been available before on CD, all out of print on vinyl and handy to have all in one place so this compilation is well justified. The CD edition has 12 tracks while analogue loyalists are perversely punished with 8 tracks. The 3 exclusive tracks are the black icing on the cake with an alternate version of Tropic of Cancer’s ‘Black Lillies At My Head’, a Regis version of ‘Manbait’ by his teen synth punk band Family Sex plus ‘Blinding Horses (Stableboy Version)’ (CD only).

The material stems from 2010-2015 so basically Regis v2.0 where relentless tempo’s were reduced and pounding, linear 4/4 kicks traded for rolling off-beats and immersive electronic textures.

Kicking off with his version of Ike Yard's ‘Loss’ that retains the stark minimalism of the original complete with deadpan vocals, slowly building into danceable post-punk/ techno hybrid. The Dalhous remix has the man in ultra-rare ambient mode complete with saxophone!?!? Then onto the industrial tribal drums of ‘Blood Witness’, the glitched up version of Vatican Shadow’s ‘Church of All Images’, the slamming, floor wrecking version of Family Sex’s titular track and the stonking steely drums and seething synth action on ‘Blinding Horses’.

One of the more obscure tracks from the O'Connor discography from 2010; Cub’s ‘C U 1’ is also included here too. Perhaps originally released to test the new direction of his sound. This came out on his Cub label which issued two 12”s exploring a similar theme of hypnotic stripped back minimalism and spooked atmospherics. Also present is the clanking Extended Version of ‘Blood Witness’ originally a white label 12” on Blackest Ever Black and now pretty sought after.

The tear jerking Tropic of Cancer version is pretty lush and seems to hover in slow motion. The Turin version of ‘Blinding Horses’ appeared on a limited numbered 12” and is also sought after, the synth that sounds like processed guitar being less dreamy maybe on this mix. Raime’s ‘This Foundry’ got the Regis treatment in 2010 giving it a more paranoid, dubbed out creepy edge. Finally for the Stableboy Version of ‘Blinding Horses’ (sadly not on the wax) he chucks the drums in the bin and tweaks the blissed melancholy synths and sustained bass into something as close to kosmische as Regis is probably ever gonna get. Need I say Highly recommended?