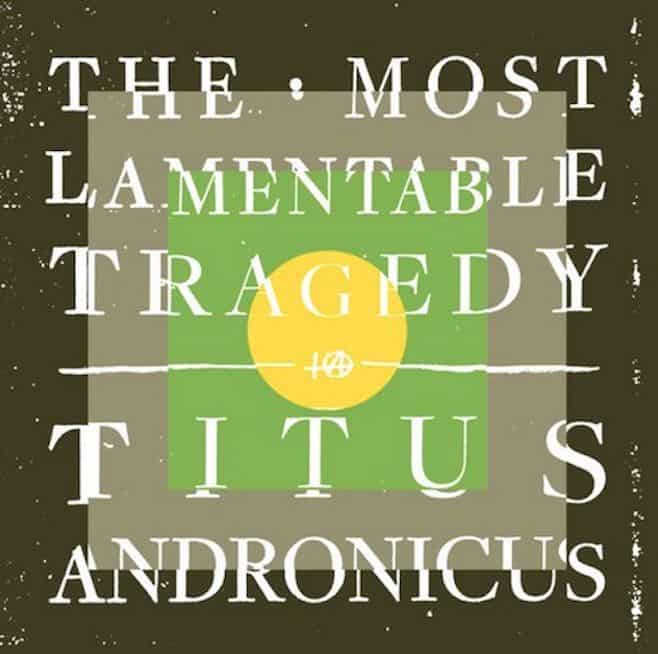 Titus Andronicus The Most Lamentable Tragedy

Titus Andronicus
'The Most Lamentable Tragedy'

American Indie stalwarts Merge Records presents the new record from Titus Andronicus, and what a record it is. Over three LPs (or two CDs) and five acts, The Most Lamentable Tragedy is a full-blown goddamn hardcore rock-opera, with suitably sweeping sound and melodramatic storyline. Titus’ biggest record, in every sense.

The Most Lamentable Tragedy by Titus Andronicus 1 review. Write a review for us »
6/10 Robin 04 August 2015

A couple of years ago, weary from the onslaught of criticism that met Titus Andronicus’ last, understated (but not very good) record ‘Local Business’, frontman Patrick Stickles joke-promised a record four LPs in length that would meet and exceed the expectations of the band’s supposed classic ‘The Monitor’. We should have taken him seriously the moment it went up for pre-order: ‘The Most Lamentable Tragedy’ is twenty-nine songs, ninety minutes long, and it’s a droning, thrashing, wallowing, wailing indie punk record that chews on the Minutemen, eats up Springsteen, pedals the Pogues, pours one out for Kevin Rowland and wants to be Predatory Headlights. Is that enough? Please say it is.

None of that is to say whether this record is good or not, a value judgment I find nearly impossible to make; on the release date for this record on our schedule, Clint’s written “I’m washing my hair that week”, though I think what he really meant is he needs to sleep this record off. It’s an endurance test in throwback punk tunes that wind through anthemic choruses and then break down the tempo to pantomimic levels (see “Stranded (On My Own)” and the Billy Joel gruff punx of “Fired Up”), unquestionably terrible a cappella renditions of patriotic standards, nine minute slow marches and tunes that sound like Tom Petty. Basically, it’s a lot, and not a lot of that seems to have crossed Stickles’ mind for more than five minutes.

The thing is that Patrick Stickles can write very good songs -- amazing, gut-busting songs -- but his mind is racing. He “only likes it when it’s dimed out”, so he spits and spews and sets off fireworks. Sometimes they make glorious shapes: “Dimed Out” is a piece of slapdash magic, chords and vocals rolling back and forth like a siren falling off an ambulance as Stickles raises the octave like the final shot of whiskey. The band bounce together on “Fatal Flaw”, a track with an almost pastoral gang chant hummed over a spindly piano honky tonk. It’s “Come On Siobhan”, though, that wins my heart: influenced by and named in tribute to the Pogues, this song sees Stickles tell a love story of two young Catholics, laying out all of his favourite melodic tricks (big, heartfelt choruses and a big, heartfelt finish, in particular) and filling in the corners with gloriously cheesy riffs. It’s the most earnest thing he’s written, but in a different way: where his best songs before were about masturbation and loneliness, this song pines for something pure.

There are twenty-nine songs on this record, and I'd do well to never hear many of them again. But I want to urge everyone I know to listen to three or four of them -- if this record was the EP I wanted it to be, it'd be the best story ever told.