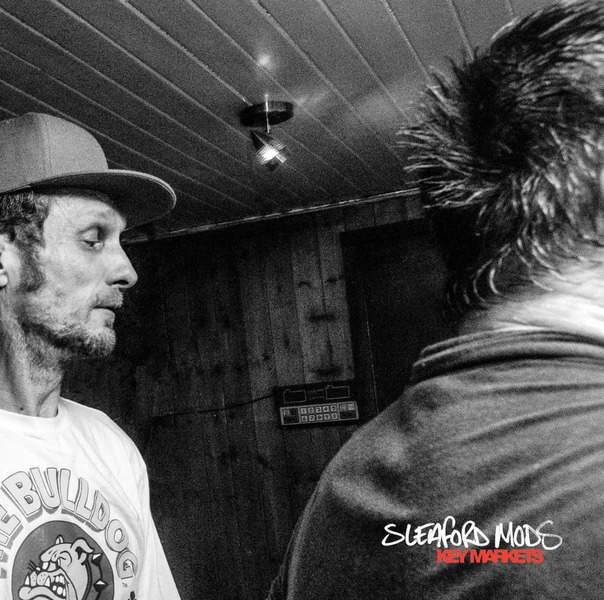 Just as the UK went back to the ballot box in 2015, our favourite agit-prop duo returned with 'proper' album number three.

Named after a particularly gruesome sounding supermarket in Grantham in the '70s and '80s, the album contains further ruminations on the disorientation of modern existence and the pointlessness of politics. "It's a classic," they said. We won't argue.

Well of course we like it. But let’s talk about it.

Sleaford Mods have actually been making records for years now, like the prolific crossover between a crusty band doing 7” splits, a rapper throwing archives onto DatPiff and, you know, the Fall. They have a good half dozen full lengths; most of us know of about three. If you want to know who’s coasting along the zeitgeist right now, it’s the fans rather than the Mods, who seem to have kept their songs’ structural integrity tight through a lineup change (in dulcet beatmaker Andrew Fearn) and a few political tremors. This is business as usual, of course… and yet.

‘Key Markets’ is different. Ever so fucking slightly, it suggests a band contented with themselves, at least, even if the country can’t sort itself out. “Live Tonight” begins with a crowd chanting the band’s name eagerly, a heckler screaming “you cunt!” as if no one’s ever thought to yell that at one of their shows before -- of course, before they can enjoy it Williamson and Fearn cut in with the bass, the stern beats, the cussing. If anything, the difference in ‘Key Markets’ is heard in the duo trying to let us know they’re the same act, while keeping their signature sound away from the harms of self-parody.

Lyrically, Williamson still sabotages his spit-stained monologues with non-sequiturs and sinking dead ends (“Where’s your wife, your kids, your house?”; “What culture? Fuck culture”, and other questions), and the production around him is tight and claustrophobic, the usual sound of a cramped garage bouncing from the outside. There are songs on here as straight-and-narrow as ye olde “Donkey” that will likely infuriate and delight, concentrated around budget lyrics and a repeating bass rhythm. There are half-fond shout outs to celebs and musicians (yo, Kate Bush) and jokes at Nick Clegg’s expense. It’s what you expected, but that doesn’t make it anymore laugh-out-loud shocking when you hear it.

Pitchfork picked bones with Williamson’s recent trend towards actually singing some of his lyrics, which can be heard in some of the record’s early-choice singles -- “No One’s Bothered” almost puts him onto a melody and “Faces to Faces” sees him briefly hum over a twinkling sample. For me, it’s a hip-hop affectation, a reminder of rappers like Young Thug, who can wring great tunes out of peculiar vocalising; it’s a reminder of all the aspirational rappers using autotune as an access for a good hook. Like them, the distinction between Williamson’s spoken word and the momentary melodies can help clarify a track of endless ranting lists.

The Mods aren’t trying to make pretty music, of course, and for every little sing-song there’s wheezing, coughing and a sickly beat wrestling with the tune (see “Arabia” in its entirety). But there’s something to be said for ‘Key Markets’ making its disillusion both loud and clear: the Mods are halfway famous now, but if you get this far through a career and the people you’re calling cunts still aren’t listening, maybe it’s time to give them an earworm.

The Sleaford Mods sound proper angry, mixing social comment with wonderfully out of date references to popular culture from the 1970s.

I gave up forcing music onto people years ago. It seems so important when you're young – but as I got older it seemed like people ended up with pretty much what they deserved.

But it turns out it IS still important, I just wasn't expecting it to happen again. The last year or 2 has seen me evangelising Sleaford Mods and dragging people to their gigs. It's like throwing people a lifebelt! The way I'd describe their appeal is, appropriately through The Jam and the lyrics to Start:

Because it's a massive relief to hear it! As a mate who I made listen to them said – finally someone's singing like the voice in my head! What's specifically great about Key Markets is that it's just business as usual. But it's THIS year's business. There must have been major pressure on Jason Williamson, with all the anticipation and build-up of this release, to try and go for it with the 'state-of-the-nation', 'spokesperson for a generation' shit.

But he didn't. He's still as fucking angry about the local geezers who're ruining town as them who are on the telly ruining the country. They're both as bad.

For me the standout song is 'In Quiet Streets'. It joins that gang of uptempo, driving, relentless numbers like 'Middle Men' 'Routine Dean' and 'The Wage Don't Fit' where the rage seems to hit hardest and the lyrical pearls tougher than most... 'my dreams of bitter minds on seats with pints in quiet streets'.

This is simply the best album of the year, so far.

As visceral and angry as Austerity Dogs or Divide and Exit and filled with with enough indignation, bile and venom to keep the most hard bitten malcontents out there happy.

The greatest band in the UK in decades by a f*****g mile!

If you only buy one green 12 inch slab of vinyl in a gatefold sleeve that contains such wondrous little ditties as 'Giddy on the Ciggies' and 'Live Tonight' make sure it's this one, you will not be disappointed.

All of this and more

Now fuck off and buy it

Sleaford Mods are undoubtably fantastic, the best band I've found in the last 15 years - I've seen them many times in the last 12 months and have raved on about them to anyone who will listen. Both previous LPs, and the singles collection Chubbed Up+ (which is the best LP in my opinion) have brilliant tracks, and not so brilliant tracks and Key Markets is much the same in that respect. Live Tonight, Giddy On The Ciggies, In Quiet Streets, The Blob, are 10/10 excellent, but (and it slightly pains me to say it) No One's Bothered is, in my opinion, by a long way the worst track they've done, Face To Faces sounds out of date already due to name checking Nick Clegg, and Bronx In 6 and C+nt Make It Up revolve around basically slagging off people in the same vein that boring hip hop bands tend to do.

Much of the interesting production from Austerity Dogs and Divide and Exit is missing from this LP - it's still largely bass and drums but too many slower hip hop style loops make up the music, so we're missing the uptempo frenzy that make the band so good to see live. It feels more cautious as a production - not so inventive in general, apart from the best tracks listed above which, in my opinion, display the best combination of excellent music and excellent lyrics. For me it's two steps forward and one back. So the band is still great and I expect the live shows will be on fire, but this record is hit and miss.

You could always start a review with a lengthy paragraph about certain present and past tense events around a particular act, or in the subsequent build up for an album release being long awaited and all that hyperbole. But it is pointless as me, the individual, to pretend to know about a multitude of these things, other than the album I have in my own hands.

Sleaford Mods have over the last couple of years proved me wrong on my view that if you are over 40 in music, then you have nothing new to offer and write about. This group could only exist as a product of the last 40+ years, and "Key Markets" is now on my rotation next to their last 2 albums.

Having already heard a few of the tracks from this LP, both live and from their recent single releases, I am looking forward to this album for sure.

The developments the Sleafords have gone through is incredible, going from feat to feat with Austerity Dogs and Divide and Exit. Now hitting a peak in their career, I myself can only expect some more great work from both Andrew and Jason. With more social political views being lobbed at us, i can see this being another hit album for the duo, advancing their career further, getting a more diverse audience playing in more and more cities around the UK and the globe.