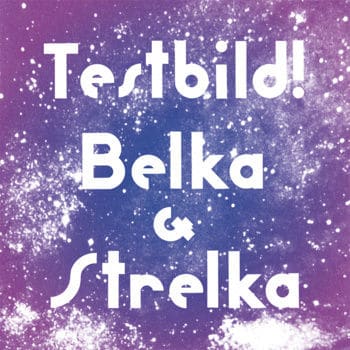 Named after two Russian dogs who were the first living beings from our planet to leave the Earths atmosphere, ‘Belka and Strelka’ is a richly layered, melodic concept album that blends electronic elements such as the beautifully warm toned analogue synthesizer sounds with jazz and pop influences to create radiant cinematic soundscapes.

Argh, getting really sick of space-themed records now. It’s almost like the guitar toting egoheads of the last decade have all bought themselves a neo-analogue synth, hit a preset and, blown away by the shuttle-takeoff tones, proceed to record an album of vapid twonk. So upon reading that Testbild [exclamation!] have named their latest record after the first two earthly beings to enter space, hostility ensued. BUT, they’re dogs. And this is the crucial point.

They’re dogs. It seems like they’ve chosen this theme as a self-conscious, mocking nod to such cliched records, an attempt to approach the concept with a bit of a light hearted touch. It reflects well in the music too, the spacey use of synth being actually quite minimal, focusing mainly on single note phrases with a few effects instead of the overblown, sickeningly evocative chords that form the usual theme. The intro of ‘Rymdfolk’ is a prime example of this - a simple, understated shimmer that gives way to a laid back drum groove akin to the Cinematic Orchestra, complete with thick plucked double bass and shiny chimes. They’re calling this jazzy in the press info, so I guess that’s what it takes to be jazzy. Or perhaps they’re referring to the adventurous chords. Mahler is well jazz.

I’d say it has more in common with classical though. It’s an atmospheric synthpop overture with a light touch of badassery and a fair dollop of proggy tendencies, the chords being unexpected but interesting like a Focus track that you’d rarely admit that you even listen to, let alone enjoy. But you do. And you pretend that you’re better than that. You fool.

Anyway I’m not sure how the review has got this far without mentioning the ever so soft vocals, because they’re great. Clean but slightly breathy and with a definite scandinavian edge, they lilt phrases about flying dogs and crazy gravity shifts. A nice, tasteful venture into the stratosphere this is, but everyone, please stop with space. We know it’s big and inhabited by bleeping buttons.