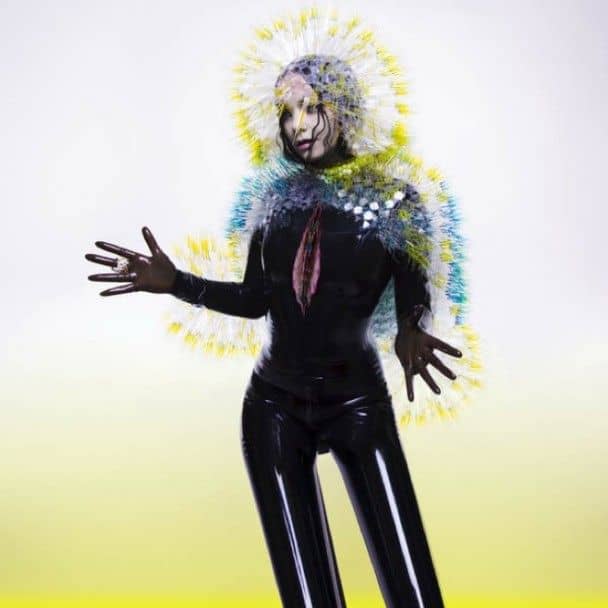 Back from Iceland, Björk is bringing another piece of her wild and crazy pop history to us. Vulnicura is released on double vinyl, in a deluxe digipack or a classic CD, but as far as we know none of the editions includes any fancy Björk swanmade dresses. We tried to make it happen, we really did.

CD in tri-fold sleeve on One Little Indian.

2LP on One Little Indian.

‘Vulnicura’ is so unconditionally painful. It is above and beyond the call of duty of any sad singer-songwriter album. It is a full consumption of heartbreak; an analysis of how to struggle with it, a treatise in feeling it, and an exhibition of the physical sound it makes. That’s a lot for one record to cover, but here it all is: with her direct gaze fixed, Björk sings lines like “these abstract, complex feelings, I just don’t know how to handle them”, plainly setting the scene for a record that is painful and confusing from start to finish, free of catharsis or release, acting as if those emotions do not exist. These songs are not the way out; she just sings them. For no reason that can be reasonably explained, she says “I better document this”, with a heavy, unresolved sigh.

Considering how hard it is to take in, it’s to the good that ‘Vulnicura’ is shapeless, constantly shifting between the fixed positions we assume of it. It is pop music; it is for a grand orchestra; it is an electronic album more abstract than Objekt and a modular synth rolled into one. The dovetailing string swells of “Stonemilker” suggest a romantic overture before “Lionsong” comes in with its dead gaze, chilling vocal layers rolling into place like arpeggios, beats tinkering and flying with a lack of understanding. These songs even have their own sub-transitions: perhaps the most shocking moment of music that’s going to happen this year is in “Family”, which sustains a coalescing howl from Björk under cover of razor-sharp beats and spewing ambience before stark violins play -- unaccompanied. It’s two different kinds of hopelessness, the latter presented like a heart attack.

With that sudden snap in proceedings, I'm reminded of how purely visceral this record is supposed to sound. I’d love to talk about every piece of technical hullabaloo that makes 'Vulnicura' what it is -- to talk about how well Björk co-ordinates Arca and the Haxan Cloak, and how amazingly Anthony intercepts with her vocal plummet on “Atom Dance” -- but frankly, I don’t think any of that is supposed to be heard. Though it has so many complexities, the science of this record is invisible, focusing on Björk’s vocal, whether it’s forced into a solo limelight or joined with dozens of other parallel universe Björks. It’s strange that every beat and string arrangement is there to construct a record that so tragically struggles for construction; this will be the hardest record to listen to this year, I think, but also the best.