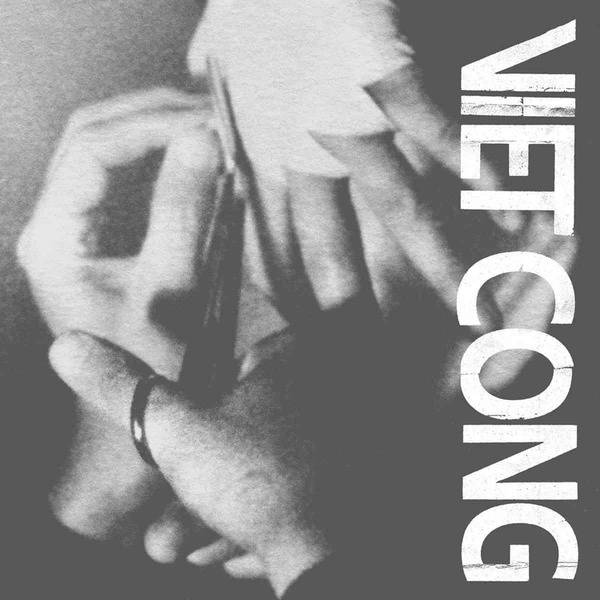 Some men from the band Women get together and put out a full length record. Viet Cong have previously released one tape and a single. They sound like Women in some parts, but Women after quite a few more drinks inside them. Lovely off kilter guitar parts wrap around tight drums (think fried out Nuggets punk), while the vocals bleed over the top. Out on limited colour LP, LP and CD.

If both of Women’s records feel like masterful accidents -- either because the band were having too much fun to give a shit about time constraints and song structures, or because they’d been preparing the downfall of their band in advance -- then Viet Cong flips the coin, offering a complete version of indie rock’s most revolutionary band. There’s vision and detail, and most significantly, there’s a lyrics sheet: unlike brother Pat, whose lyrics brimmed over in choice moments, being murmured from underneath the duvet of noise like Unwound on ‘Leaves Turn Inside You’, Matt Flegel’s words carry whole philosophies, laid out clearly and precisely so that we can get a feel for what his band stand for. By the way, they stand for death. There’s a celestial guitar riff rounding off “Newspaper Spoons”, but the takeaway is a lot more disturbing: we’re “deliberately made to disintegrate”. ‘Viet Cong’ is a dark, distressing and epic indie rock record, and like this generation’s first classic, ‘Funeral’, it’s one to mourn.

The riff that closes out “Newspaper Spoons” brings to mind Viet Cong’s early form: on last year’s ‘Cassette’, such an elegiac moment would have been typical of the band. Placed here, in the dying moments of their new record’s opener, it stands as one last joyous gasp before a record of excruciating guitar collisions. It’s succeeded by the totally grayscale “Pointless Experience”, which uses a drumbeat that rhymically implies taking one step forward and two steps back; the guitars, meanwhile, juxtapose subtle melodies with overwhelming discordance, as if to make the best things useless in the face of death. And the moment we’re all going to be singing along to live? “If we’re lucky, we’ll grow old and die”.

Viet Cong might sound singular, but they speak the language of Canadian indie rock. Flegel’s voice yelps and stammers in a way that post-punk brooding doesn’t usually allow for, but that British Columbia might; he might be a staunch realist, but he recalls dragonslayer Spencer Krug in his most dramatic moments, his work layered as slyly and subliminally as Krug’s songs were on Wolf Parade and Sunset Rubdown records. He also reeks of Destroyer’s smug assurance; like Dan Bejar, there’s no debating Flegel’s lyrics, because they’re always stated as fact (“When all is said and done, you’ll be around until you’re gone”), or else they’re pure rhetoric (he isn’t looking for an answer to “What is the difference between love and hate?”). Finally, and most Canadian of all, there’s hints of Frog Eyes: a song such as “Bunker Buster” is nihilistic as fuck and appreciates that the end of the world is coming (“we’re going no where at all”), but it believes that none of that matters in the face of a really good riff. And so the band plays one, over and over, tinkering with it, moving it up the scale, bending each of the strings that helps make it. It will keep us going.

What’s important here is that the music is huge. It’s the stuff that we used to hear in the grandiose indie rock of old, but shaded in with gruesome detail: feedback, distortion, and five minute showboats in which the band collapse around Mike Wallace’s well worn drumkit. ‘Viet Cong’ is constantly filled with a sense of movement, even when it stagnates and repeats; it feels urgent and blinded by action, “Silhouettes” driving off in a chase of neon synths, simmering riffs and pantomimic vocal harmonies. There are vocal harmonies. Half these dudes used to be in Women and there are vocal harmonies.

Frankly, that’s it, because our promo copy has been played about fifty times and has given up on us. It’s in the next life now -- although ‘Viet Cong’ doesn’t believe in next lives. Death is just white noise. This record drowns out the silence in my slowly ending life.

I'm afraid to say, I was a bit underwhelmed by this - possibly I was victim of over-expectation ( if that's a word, or hyphenated word ). Having read the review on this esteemed site, on other well known sites that accept customers reviews and on the basis of "Continental Shelf" being included on the freebie in Uncut I went for it. And indeed, "Continental Shelf" is a belter, worth the price of admission alone - best riff I've heard this year I think. "Silhouettes" is a fine tune too. The rest isn't all bad, although some of it veers a bit too close to Human League territory I think - crossed with the Fall. Look, it won't kill you, but probably not as good as you may have been lead to believe....

From the monochrome residue of disbanded Montreal post-punk-wave-cold-jangle-math-tape-hiss outfit Women, come the triumphant Viet Cong. There's all the best elements of Women represented here; the lo-fi Tascam production, treble laden guitars, distant reverberating vocals, obscure time signatures and drone jams a la Velvet Underground. But, this isn't an imitation record. They harness the aforementioned elements of Women, and take them into a more melodically conscious sonic realm; ending up with a sound that's like the morose offspring of The Sonics and Joy Division.

The LP opens with "Newspaper Spoons"; an onslaught of guitar fizz, Mary Chain-esque drumming, tape wankery and apt lyrics detailing: violence, vanishing boredom, EXISTENCE, distortion and most importantly - newspaper spoons. The track finishes off with some harmoniously major key synth arpeggios as it drifts off into the hazy hiss of the distance. It only gets better from there, particularly with "March of Progress" and the lead single "Continental Shelf", which feature, in my opinion, the most memorable and interesting hooks of the entire album. But, the most enjoyable track for me is definitely with the finale: "Death"; which commences in regular Viet Cong territory, then goes into a drone-y Can-like trance jam state - to a Black Sabbath two chord chug - then back home for some jangly intersecting guitar leads.

It delivers. Melodies, drones, feedback, interesting/complex guitar passages (which I think is distinctly lacking from a lot of guitar driven indie rock bands these days) rapid militaristic drums; and a singer with abstract meditations on newspaper and spoons - with a deadpan vibrato to boot.