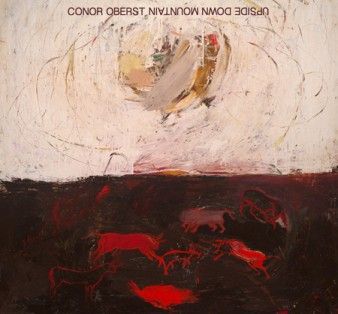 US import 2LP + CD on Nonesuch.

The first time Conor Oberst hit my radar was back in 2005 when, home one night with MTV on in the background, I happened upon the video for the Bright Eyes song ‘Lua’.

The starkness of the arrangement; the wobbly cracked-up vocals and the bleak low fi simplicity of the video were so at odds with the technicolour mega-bucks in-ya-face blur I’d been conditioned to expect from MTV that I was all of a sudden totally transfixed by the tiny freezing-looking man in a scarf croaking this disarmingly simple song over a lazily strummed guitar, and (I’m not joking) at that moment a small part of my life changed forever. The subsequent album ‘I’m Wide Awake It’s Morning’ is still in my top 10 records of all time.

Since (and before) then, Oberst has experimented with an array of sounds and atmospheres; from experimental bleepery to bouncy folk to dirty electronic punk… always eclectic, yet every album delivering those stunning lyrics with that same bleak quavering voice. But with such prolific and varying output, it’s inevitable that opinions (even among the most die-hard of fans) will sometimes be split. And, for me, this new record just isn’t ‘my’ Conor Oberst. To be fair though, it’s probably me and not him.

‘Upside Down Mountain’ is a very polished-sounding album. Some might say it shows a more mature side to Oberst, and that would be a hard one to argue with. Opener ‘Time Forgot’ with its neatly double-tracked vocals and tidily-placed guitar runs is pleasant enough, and the album as a whole has a very polished sound. Even the more stripped-down songs, such as ‘You are your mother’s child’, perhaps the most reminiscent of his earlier years, are missing the raw adolescent angst we know and love Oberst for. The wonky vocals somehow don’t sound so wonky here, and yes, his oft-mumbled lyrics do shine as a result.

But, like Huckleberry Fin when he stayed with the nice lady who dressed him in fine clothes and tried to make him behave, there’s something just not very Conor Oberst about it all. The man could play his songs on his own in a ditch and they would still be wonderful, so whether the pristine production on ‘Upside Down Mountain’ is necessary or indeed interesting enough is open for debate. In fairness, everyone has to grow up sometime. But I for one can’t help hoping he continues to experiment and innovate, and perhaps the next album will blow me away instead. Here’s hoping.