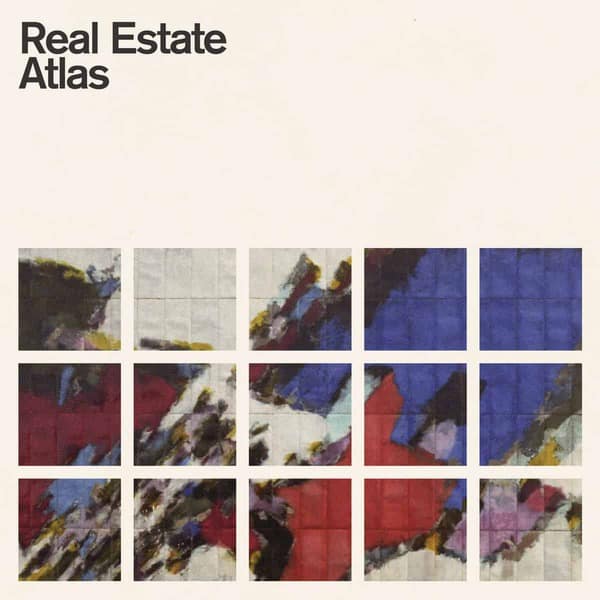 Real Estate were really on fire around the turn of the...um...noughties to the tens. They'd already made the magnificent Days album  - a decade best surely but Atlas was no slouch either honing their particularly lovely brand of guitar pop and providing enough jangle to fill even the longest summer day. Utterly gorgeous sun dappled guitar music for fans of Felt, the Smiths, the Feelies, R.E.M etc.

There is something very reassuring about knowing that there are some things in life you can rely on.

In a recent interview, Real Estate guitarist/singer Martin Courtney said ”I know the path that we’re going down and it’s not to say that we fear change or anything, it’s just I think I like this sound”. I do too and its refreshing to find a band who aren’t totally striving beyond their reach or trying to impress people with a hip new direction or sound. The result is this...Real Estate have made another album, its very good, everythings cool, lets not sweat it eh?

With previous album ‘Days’ turning out to be a potential decade best, ‘Atlas’ is another sure-fire winner, it just falls short on not having that killer pop hook (a la ‘Its Real’) and the latter half feels a tad undernourished. There are though, as you may expect, a myriad of wonderful highlights.

Opener ‘Had to Hear’ does everything you want a Real Estate record to do. A lovely descending chord sequence is joined by Matt Mondanile’s always crystalline guitar figures and away we go. The vocals are as laid back as ever, Courtney has recently relocated back to his beloved New Jersey suburbs, got married and has the stress free delivery of a man whose life is panning out pre-tay nicely thank you. The jangling intertwined guitars as always evoking that feeling of being out at night on your bike as a kid, the phone wires silhouetted against the darkening sky.

‘Past Lives’ begins with a drum and rhodes piano loop before the ever gorgeous dual guitars kick in. Its such a delightful sound,this is one of my favourite Real Estate songs to date, an absolute tremendous four minutes to while away some time. So a great opening one-two then. Wow. Some props for this have to go to new drummer, the wonderfully monikered Jackson Pollis, his style is simple and effective, he never overplays, his laid back style fits Real Estate like a glove. The sequence of the album generally follows that of ‘Days’; two gorgeous openers, then comes the ‘hit’ in this case the sprightly ‘Talking Backwards’ which is ultra tuneful, ultra laid back. ‘April’s Song’ takes the ‘Kinder Blumen’ place as the albums token instrumental. A lovely little surfy affair, not unlike when Yo La Tengo decide to try to go all Dick Dale  on our asses for a little while,  it also harks back a little to the bands more surfy, twangy roots.

‘The Bend’, whilst a shimmering mid paced effort, is the first moment where I feel Real Estate aren’t quite hitting the high water marks of ‘Days’. Perfectly lovely particularly when it bursts into the breezy chorus, Mondanile’s string bending is a little...how should I put it?..... ‘mature’ and I’m not over-keen on the loping coda. Its a minor gripe though which ‘Crime’ more than makes up for it with another sea-spray of plangent guitars. Its almost unfathomable how much this band recall The Feelies without particularly sounding all that similar to them.Its in the guitars I think, its that watery, New Jersey interplay. Real Estate are, however, much better songwriters exemplified here with a super little burst of chorus melody earworm when Courtney pleads ‘stay with me’.

‘Primitive’ too is a lovely drifty almost...dare I say it...Eagles(?!)….inching in that direction anyway, a heat haze of summery stoned guitar interplay. Bassist Alex Bleeker always gets a a turn and his ‘How I Might Live’ is a slight country plodder at a place where the album maybe needs a lift. ‘Horizon’ though soon follows and picks up the pace with a lovely swiftly descending guitar pattern and some lively drumming. Closer ‘Navigator’ is a sun dappled beauty with the most tremendous tangle of guitars on the ‘cross the kitchen floor’ section . The only disappointment is that the song finishes all too soon and the album just kind of drifts to a close without that major killer finale.

But what else do I really expect? True,  there is the occasional less-than-perfect moment but that just reinforces how high Real Estate’s stock has risen. They do their ‘thing’ and they do it time and time again. I’ve enjoyed listening to this album as much as I’ve enjoyed doing anything in my entire life, its a gorgeous, sun dappled, tree-shaded treat. Fans of Felt, The Go-Betweens, mid 80’s R.E.M, Yo La Tengo, The Feelies, The Byrds, Miracle Legion will lap it up. Still, not quite as a good as ‘Days’ but …...what is?

I love these boys I do! I once drove 7 hours from some remote mountain range in New Zealand to attend a Real Estate gig then drove back the next day and climbed the mountain. True story that. Nearly ended my relationship. Anyway having pretty much loved and owned everything these fellas have ever put out as a group or individually my loyalty wavered somewhat with the release of the last Ducktails LP outing. I'm glad he made it though and got all that pastiche 80s stuff out his head because 'Atlas' is nothing short of an absolute triumph. Its the kind of record that makes me wanna chuck all my more 'difficult' (cringe) music out the window and have this playing on repeat for the rest of all time. It just makes me feel fucking outstanding. You all know what to expect by now, guitar hooks that will melt your heart and put a spring in your step at the same time. 3 minute pop nuggets and bendy instrumentals combine with wistful but optimistic lyrics that whisk you off to a place that you've never been but feel so familiar with. The addition of new permanent band players and 'live' sound captured only adds to the magic, you can now feel like you're in the same room everytime you slip this on the turntable. 'Real Estate' 'Days' now 'Atals' its like a left foot, right foot, header... Perfect hat-trick. I never had a Yo La Tengo or Pavement to latch onto and call my own. I do now. Nice one lads... Now wheres my road map?

All grown-up and stuff... Bleeker, Courtney and Mondanile, that constant triptych of laidback dudes making horizontal guitar band music under the Real Estate moniker, are supplemented for their superb third album (having pissed the cliché of that 'difficult second') by new-boys Jackson Pollis and Matt Kallman. Not, I impress, that you'd know that the band hadn't been grooving together for a more than the odd millennium or so. Like a sandpapered wooded object of great beauty there's no rough on this production, just pure smooth, smoothed down and then smoothed down some more until the grain's warps and wefts become a like sheet of single glass covered in olive oil. Oh my! The disc hit my platter straight from Thursday's postal delivery, and it's still there. Eagulls are shouting rude things from the TT queue but, and that's a grown-up, I mean what I say but, they'll have to wait until next week... Harsh but fair! There are few bands of any genre or persuasion that I find are as damned-near perfect as this blissfully suburbanite crew. Tom Schick's production is a masterclass in letting the dog see the rabbit: balanced as female gymnast on the beam, the tracks provide a constant flow of guitar-led beauty. Buy it, buy it now!