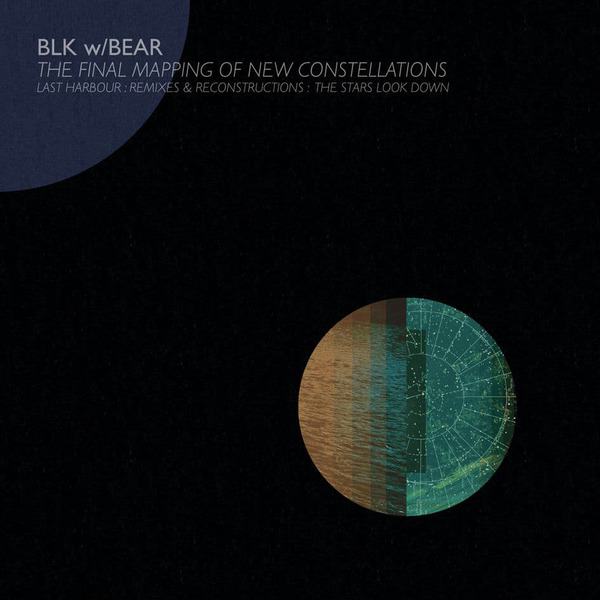 The Final Mapping Of New Constellations by BLK w/BEAR was available on CD but is now sold out on all formats, sorry.

Take a look at what else we have in by BLK w/BEAR, head over to our new releases or knock yourself out reading our latest music news & album reviews.

An intriguing disc here. What we have is a remix album of sorts by BLK w/BEAR, the source material being ‘The Stars Look Down’ by Last Harbour who I recall are a Gothic chamber folk rock outfit of sorts for fans of Cave, Gira, Tindersticks and maybe Murder by Death, that sorta thing. Lots of strings and moody post-rock touches to their music.

Unfortunately for their postman, Washington's BLK w/BEAR seem pretty happy to wallow in sonic abstractions, otherworldly drones and brittle avant-classical discordance. So if you're after songs with words and tunes to hum here be warned! I mean, opening with a looped piano clunk is enough to piss anyone off when they've just woken up and haven't had requisite coffee. I'm glad it just lasts a pinch over a minute.

After that things improve dramatically. The subsequent piece being an atmospheric meander through a post-apocalyptic landscape encompassing Godspeed-like distant cello, pained displaced brass shrieks, lugubrious piano and funereal percussion. It's a remarkable piece of desolate music. This chamber-improv vibe continues into the next piece 'Lapfult' which wears a shroud of impenetrable hovering fuzz and decaying reverb whilst dropping blunted depth charges sporadically into the ghostly skeletal murk beneath.

Further in, there are nightmarish shifting whirls of dark ambience smothering a semblance of a rhythm or a spectral melody beneath. This is then superceded by a lovely ricochet of some unidentifiable loose stringed instrument playing a melancholy coda. Could even be a guitar, but it sounds too echo-y and disembodied?

'Sandtraint' is the final piece I feel qualified to comment on as time bites. Beginning with a distant piano played jarringly on the high keys so it almost resembles a harp or dulcimer (or could be....?) before a wonderful swoop of violin skirts a muddied display of determined acoustic dissonance. A mandolin by all accounts! Without a doubt my favoured slice of strangeness this lunchtime. Gutted it lasts nary three minutes. Many later pieces are reasonably brief but suggest true supreme craftmanship, One named 'Eastern Blind particularly intoxicating.

I'm gonna get stuck into the 10 minute centerpiece 'Grand Order Of The Eastern Star'. It sounds majestic, terrifying and very demanding. My words are no longer needed here...