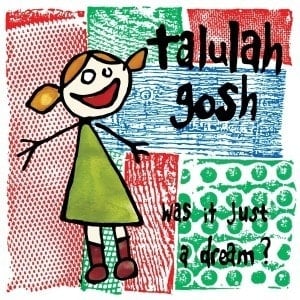 Talulah Gosh Was It Just A Dream?

Talulah Gosh
'Was It Just A Dream?'

All or most of these smashing little songs (probably) featured on Backwash, a hard to find compilation released on Calvin Klein's 'K' records label, an imprint which he invented after drinking too much horse tranquiliser-laced strong cider in the park whilst sketching rampaging ducks and geese. As K is American and we're a stupid tiny island that everyone forgets about, this collection proved elusive to many Hard Working Britons who had to mine a quarry full of coal in order to pay the postage for an overpriced CD, never mind double-yummy vinyl from them thar States of the Americas. Now, LOOK! Damaged Goods records of that London, down there, have done us Europeaners proud with this lovely smorgasboard of pioneering guitar POP! and squeezed all of Amelia and co's skippy, skiffly jangle-some wares onto an affordable platter or two. Singles, Peel session tracks, all the freakin' hits Ma!

If you want a potted history of the band go here

because they inadvertently invented Sarah records and Indietracks festival and everything that's joyous about the gayer side of indie (that's gay as in the original meaning of the word y' know...).

Also half their songs make me cry a bit, they are infused with so much joie de vivre they're almost supernatural. They can play fucking well too, ie. not a shambling incompetent mess like some chancers these days. Phew...what a legacy they left. The subsequent band, Heavenly, were pretty great but never reached these dizzying heights. Stewart Anderson/Boyracer of 555 records fame named his daughter after this band I believe. That's how important they are. Just buy this if you like British indie pop from the '80s, you will not be disappointed.