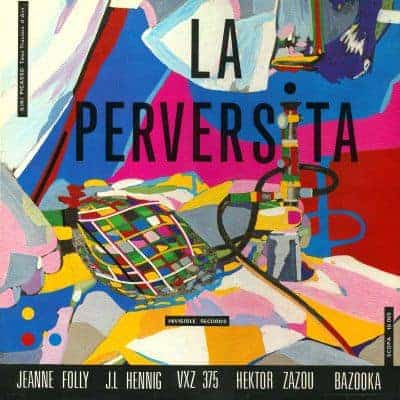 La Perversita by Jeanne Folly, J.L Hennig, VXZ 375, Hektor Zazou, Bazooka was available on Vinyl LP but is now sold out on all formats, sorry.

Take a look at what else we have in by Jeanne Folly, J.L Hennig, VXZ 375, Hektor Zazou, Bazooka, head over to our new releases or knock yourself out reading our latest music news & album reviews. 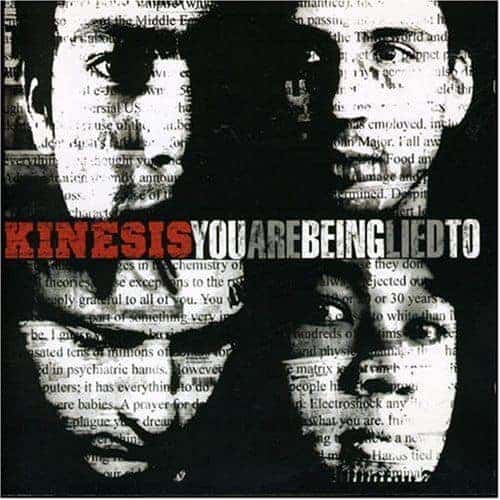 KINESIS
You Are Being Lied To

“I don’t know what this is, something Brian ordered in,” said Phil this morning. Bound to be as mad as a lorry full of marmalade I thought and it turns out I’d hit the nail on the head with Eric Bristow like accuracy (that is if Eric Bristow hammered in nails for a living).

The opening track ‘Face Pile’ (quite) has a David Byrne soundalike repeating ‘can’t get no satisfaction’ over and over joined by a terrifying French voice, half robot, half Edith Artois. The second track ‘Strawberry Fields Forever’ (not that one of course) has some eerie yet squealy guitar and is again laden with seductive French voices. The next track has a title in French that I can’t be bothered to type out and it sounds like Monsieur Alfonse chanting over Frank Zappa. I will, at some point, stop with the ‘Allo ‘Allo references, I’m even boring myself.

It’s an album of the most bizarre experimental rock, the tracks appear to play at half pace, with awkward guitars that buzz in and out of the mix. Occasionally it almost pretty as on ‘I Love You S’ though I’d be hard pressed to imagine the reaction of a loved one if I played them this as a romantic gesture. I’m still no nearer to finding out what it’s all about, the press release compares it to Nurse With Wound and Tuxedomoon. Does that help? I do hope so.

Strange, perverse in fact, French, and oddly addictive, this is a reissue of the ‘holy grail of French record collectors' according to none other than Andrew Weatherall himself.

Now on yellow vinyl (sadly without the fruity posters of the original), making reference to the track La Soupeuse, which according to Ivan Smagghe (Weatherall’s compadre) is someone who retrieves croutons from public urinals for later consumption.

So, not for the faint-hearted this album, although most of it is in French, so unless you're a bi-lingual Victorian lady don’t upset yourself. The music is slow and downbeat, with a sort of Gallic groove. I Love You S, Para Bokassa and La Soupeuse are the stand out tracks as well as being the longest.

But few, after hearing it, will forget the version (not really a cover) of Strawberry Fields Forever. This is sung by a man who appears to have over-imbibed the old Absinthe – that yellow again – or perhaps is losing his mind; although it is not as over the top as old William Shatner’s bizarre take on ‘Lucy In The Sky With Diamonds’, which some may know, that is in another league.

Zazou and his collaborators clearly liked working on others’ material, as there is another ‘version’ of a classic: the Stones’ ‘Satisfaction’ that makes Devo’s cover sound ordinary.

Zazou was clearly an experimenter, and more recently has covered Donna Summer’s ‘I Feel Love’ (find it on Soundcloud). This is an outstanding version: slow, with an arabic feel, perfect for a summer’s evening or Ibizan sunset. That's not on this album, I hasten to add, but having now discovered him I’m hooked.