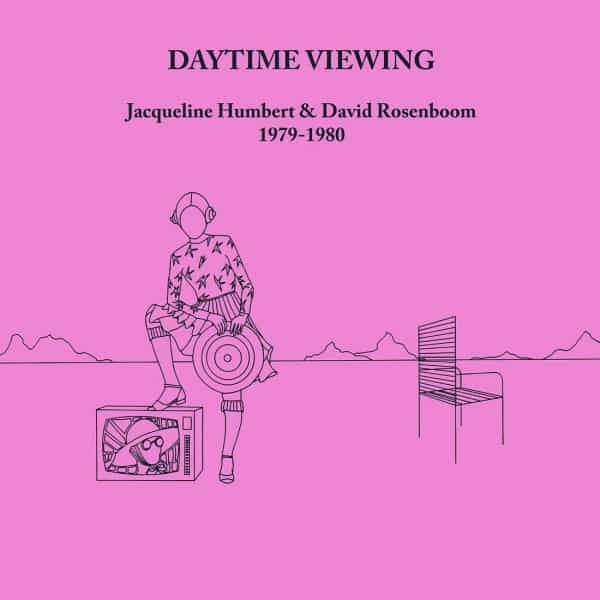 Daytime Viewing by Jacqueline Humbert & David Rosenboom 1 review. Write a review for us »

"Otherworldly art-installation music, ‘Daytime Viewing’ is a fantastic piece of music that deserves a massive audience. Thank goodness Unseen Worlds has given us this beautifully packaged and pressed LP, it really is a lovely thing. It’s hard to describe the music, it doesn’t really sound like much I know, but mainly consists of a woman talking and singing over electronic pulses and melodies, whilst percussion drives it along. It’s described as a ‘narrative piece’ and I guess the description given by the label puts it perfectly : “The piece explores the use of fantasy as a survival mechanism against loneliness, illustrating the human compulsion to inflate the mundane to mythological proportions”.

The opening track ‘Talk 1’ sticks closely to this idea, the TV as escape, fantasy, a monotone detached voice over floaty dreamy synths and electronics. The next track is ‘Bareback’ where a more kitchen-sink drama unfolds with pretty harmonies and upbeat music. The lyrics are odd though, I’ve listened to ‘Bareback’ many times and the way the description of domestic strife turns into an angelic section about a woman inappropriately fondling a baby boy is really quite disturbing. The music is so pretty, astoundingly different, but the lyrics, wow, it’s such an odd track, much creepier than any dark-ambient noise thing. I think it’s a stunningly brilliant track, I love it, but I’m not sure whether I should! ‘Domestic Violence’ proves that Jacqueline can really sing as well. The track shifts tempo a few times, has different soundscapes and Jacqueline shifts from delicate choral singing to wry advertisement-speak multiple times. On the shortest track on the album ‘Distant Space’ the most complete pop song is presented. It’s just a wonderful track of heartbreak and breakup with fantastic, unusual instrumentation. After that ‘Talk 2’ starts up; building percussion and bouncy synth lines move along with light flourishes and cute hooks. Jacqueline talks in the monotone trance-style of the viewer lost in the daytime viewing, a kind of bored, easy and soft comfort blanket. The TV as psychological escape from the problems of the real world she calls “dream time”. The last track ‘Wishes’ is a summing up of the themes of the album, an explicit call for escape to “anywhere”, but she still views Paris through the prism of fashion adverts and shopping-channel sales-speak, New York is “dancing along Broadway” and “muggers after dark”. Visions of places formed via the TV, L.A. is “go be a movie-star” and “swimming pools”.

As a piece of conceptual art this album is a triumph, a wry commentary on the increasing commercialisation and hedonic haze of late 70’s America. It would be nothing without the music though, which is fantastic throughout. I love this album, it has a massive recommendation from me, it’s really unique and odd. For ‘art’ music it is incredibly musical and pop, which is its great strength - when you think of ‘art installation’ music you normally imagine stale, mechanical and dry noise. This is warm, full of life and sounds absolutely vital and innovative even today. Utterly fantastic."