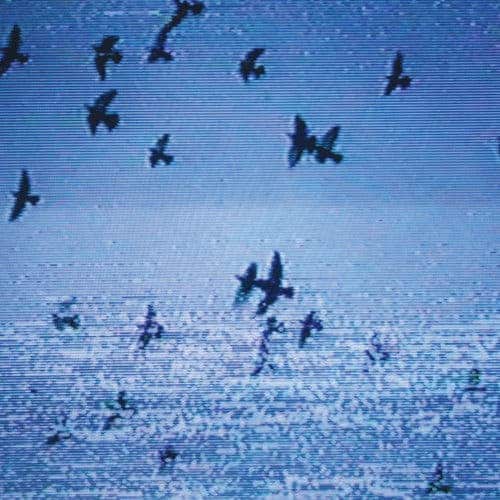 In a sign of the audience-splitting effect that this new album from Epic 45's Rob Glover is likely to have it fell on me, by far the least experienced of our venerable reviewing staff, to offer my services as an objective gun for hire. Or, as Phil put it, "you can be the review bike".

I think it's fair to say about Glover's offshoot project: there will be opinions of the ‘polar opposite’ variety. If you're one of those people for whom the words "80s style synth pop" awaken fears of power-suited, coke-addled yuppies clutching cocktails in nightclubs in the hellhole towns of South East England (hi, Reading!) then you can stop right now. You won't like this record. Indeed, even amongst those who don't run in fear from all things 80s there are going to be heads scratched, hairs pulled out, and blood pressures raised.

What can I say? I, the review bike, like this record.

You get the picture. This isn't so much influenced by the 80s as flat-out praying at the altar of that decade. No, even that's not enough. This is beyond mere copying, beyond homage, beyond pastiche, beyond nostalgia. It's like Rob Glover has truly tried to recreate the 80s as he experienced them in his own head and, satisfied that he has captured his vision perfectly, now wants to conjure up the very same imaginative space in our heads. Given where he comes from as a musician, how radical a departure this is from Epic 45, you've got to admire his boldness. The bloke has bollocks the size of a Duran Duran yacht.

It's actually really bloody unsettling at times. Part of me wants to yell, "Get out of my head!", so acute are some of the musical observations. I'm one episode of 'Airwolf' away from pulling on my middle-school uniform and fully regressing here. If you grew up under Thatcher then I guarantee you that some of the hooks deployed aren't merely sharp and hooky, like normal hooks. No, these are the hooks that are so deeply embedded in your very being that you've forgotten about their existence. You've been happily swimming around in other genres now for a good few decades, little fishy, but it's time to be reeled back in and served up for Uncle Rob’s dinner.

It's in this context that the opener, 'Proem', makes most sense. It starts with the slightly disturbing tinkling of something that sounds like an antique music box (a pretty clever way to begin for, say, an artist trying to prise open the listener's earliest unconscious recollections of melody). After about 30 seconds of this you start hearing the first traces of synth, which get about another 30 seconds before a vocal track rings out that is so clear and crisply produced - such a pure 80s sound - that Tony Hadley must've thought someone was walking over his grave when it was recorded.

The second track, 'Happenstance', plays similar tricks. This time it's poor Bernard Sumner getting the chills, and he can't complain because this is as good as anything New Order ever did. They just did it first and therefore, before anyone seeks me out to strike me down with a Voyetra 8, win on the equivalent of away goals or something.

And so it continues. The standout track in this regard is 'Kessler'. You have all heard this song before. In fact, you don't need to buy this album to hear this song: just close your eyes, think of anything you authentically recall from the 80s, and this song will play in your head. Even my wife (who grew up in the 90s, and is therefore a detached observer as far as this record is concerned) had to give this just the merest listen before she started singing "Don't You (Forget About Me)".

Maybe that sentence will have killed stone-dead any chance of this review persuading you to listen to 'Waves' with the cool impartiality necessary to appreciate its value. It made me pause, I snobbishly admit. But what were the 80s about, really? You can't hope to recreate the 80s by being timid, or by pretending that this was a time when bombast wasn't having its way. To capture the spirit of the 80s you've gotta be brash, glassy, arch, knowing, arty, experimental, and probably a bit cold. Otherwise you've got no hope of capturing the good bits of the 80s and no hope of releasing, with a straight face, such a deeply personal record.

It’s upon paradoxes such as these that this album rests. You’ll either get it or you won’t, and it gets a 7/10 from me. Fuck it, 8/10. Feels a bit dirty, but then I am the review bike.

Agree with the two reviewers here. This is a very surprising departure from the epic45 style but once you get past the shock effect it's definitely worthwhile.

If you dislike this kind of 80s electro then I very much doubt that this album is going to change your minds, but if you are the kind of person who still digs out their New Order albums occasionally - or who simply likes a burst of 80s nostalgia every so often - then this is for you.

So, yes, it wears its influences very obviously - possibly a little too obviously. But it's a striking and gutsy album from an artist showing us all that he isn't afraid to take risks. I wish more acts would do the same thing.

A few months ago, Rob posted a few rough mixes of the tracks which would ultimately grace this "Walls" EP, and they sounded terrific then. In their finished form, they represent all that was special in '80's electronica - great, crisply engineered tunes that you hum absent-mindedly, chest-pounding bass lines and haunting lyrics. These tunes are a labour of love; each listen reveals yet more layers of subtle instrumentation, making it a must to put those headphones on, turn up the volume and let the music envelope you. Give this a try, you won't be disappointed !!