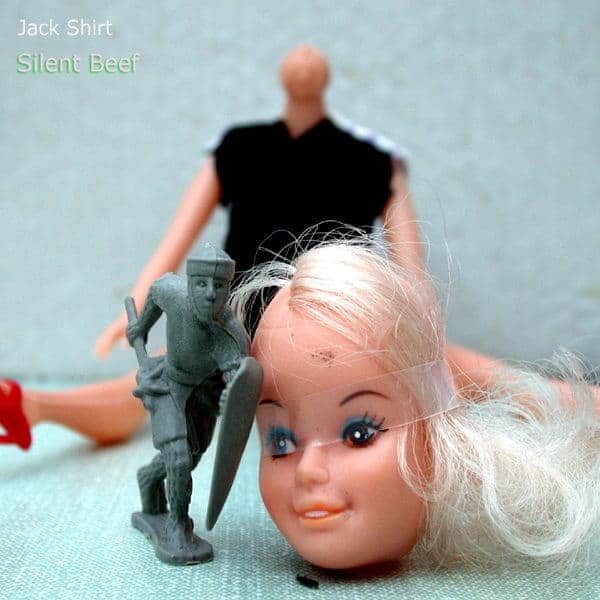 CD on Scratch My Book Records.

Silent Beef by Jack Shirt 2 reviews. Write a review for us »

Jack Shirt is a one-man project and Silent Beef is his second album. Itâ€™s a weird and marvellous sonic adventure through a kaleidoscope of concise and witty musical adventures.

The whole album feels like a knowing and sly smirk. Thereâ€™s an exuberance for music that weaves in and out with a unique irony and spark as the album unfolds. Somehow the playing always seems slightly ahead of the beat, as if rushing into a joyous and laughing manifestation.

The sense of wit and character the music conveys (and mostly there are no lyrics, its primarily instrumental) is reflected in the song titles. What independent musician or underground music lover could not empathise with a song called "I donâ€™t want to die in poverty"?

Track titles like "Happy Prog Nightmare", and "Because Iâ€™ve got nothing better to do" put a smile on my face, and they really do serve well as a mirror and door to the music this subtle and astute composer creates.

The songs are all short, often only a minute or two long, rarely more than three. This is a good thing; as is the albumâ€™s length (just shy of 30 minutes). The reason is anything but because you want it to be over! Rather, each song dips us into a different and fascinating milieu, tantalising the ears briefly before flitting away once more.

Thereâ€™s something playfully seductive about this approach; one expensive chocolate is far more pleasurable than a huge block of the cheap stuff. As such I find myself compulsively listening to the album, trying to unlock its mysteries in the short moments of its revelation.

Mr Shirt clearly has a wealth of inspiration and ideas but in restraining them in this particular way he actually opens the songs into a kind of almost timeless fascination.

The other aspect of this music that I really like is its intimate, domestic feel. Recorded entirely in Mr Shirtâ€™s flat in London, it feels like the music is indeed bouncing around in a small concrete apartment, homey and cluttered.

Itâ€™s like Mr Shirt has invited us round for a cup of tea and some bikkies and to sample his marvellous new album. This is odd, playful, edgy and joyous music, so if that sounds like your cup of tea then Jack Shirtâ€™s lounge room is the place to drink it.

Pretty much every LP we get our hands on, we can liken it to somethin' else. After receiving 'Silent Beef' by Jack Shirt, we're not so sure. See, what we have here is an album that does kinda sound like other stuff... but most of the things it sounds like aren't actually LPs.

Lookin'at the sleeve, of a disembodied doll head and the dastardly swine whodid it tryin' to make a quick getaway, you should've really been givena clue that this was going to be an odd rekkid... one with murderoustendencies... but it's not until the slash 'n' grab groove enters yourear that you discover just how murderous the groove really is...It'sa good job Charlie Manson is locked up. Serious. If he heard this LP,he'd be now filled with secret codes, misinterpreted from basslines andthe like, ready to kickstart a race-war or sumpin'. Reading thetracklisting is enough to make my mind go a little West. Dig. This isan album filled with pieces of music called 'The Cheapest Lunchbreak','Limping Ballerinas' and 'Happy Prog Nightmare'. To describethis long-player, I'm-a-gonna have to get creative. Fact is, it soundslike the hauntings of a crazed Hammer Horror fan, his dreams shot in8bit and recreated as a ghost level on Mario. There's a guitar inthere, sure, but weird discordant Casio keyboards sit atop, drifting inand out of tune, making your thought turn to running around a towncentre in a black cape, biting virgin's necks. That's not tosay this LP will drive you to senseless murder. There's some reallysweet moments that make you feel like you're floating on a sea ofcream. When this LP isn't whispering a seething instruction in yourear, it's flitting between zonked out electronics and the nicer bits ofThe Faust Tapes. To even suppose that this album has songs is a bitwayward.The back of the sleeve tellsyer there's 11 tracks... butreally, it feels like one long broadcast, one long soundtrack to a filmthat you don't feel quite brave enough to watch... featuring musiciansfrom Tortoise, Broadcast and lesser known Twisted Nerve artistes. It'sfair to assume that this release will not dent the Top 40 hit parade...and nor should we assume that Jack Shirt will grace the cover of QMagazine anytime soon... but that's a good thing. Basically, this LP isa fantastic collage of everything in the artist's head, all tumblingout and wired-up wrong. This is an album steeped in the experimentalismof Krautrock and really fucked-up folksike, the sorta thing that wouldget a release in the mid-70s, leaving everyone completely confused,later to become something of a cult classic.If you've got thenuts, go buy 'Silent Beef'. You won't know what to make of it, buthopefully, like me, you'll be strangely enchanted by it and findyourself inventing the pictures for the terrifying, and sometimesbeautiful, sonic visions. [mof]