The Hardest Touring Artists of 2018

It’s a golden age for live music, with artists hitting the road more often and for longer stretches. Getting sweaty with a bunch of like-minded fans provides the tangible experience lacking in an age where algorithms dominate listening habits. Which got us thinking. Who are the hardest touring artists?

The answers surprised us. We crunched some numbers based on the 1,000 most popular artists on Songkick this November and December. From that data we've cobbled together a bunch of Top 10s from across six loosely-defined genres - rock, metal, dance, electronic, hip-hop, and good old singer-songwriters - to reveal the hardest-gigging artists of 2018.

Whether you love them, loathe them, have never heard of them, or are just plain indifferent towards their existence, you've got to respect the work ethic.

Before we get into the more detailed stuff, let's take a look at the genres piling up the most miles and the artists who clearly don't know the meaning of "slow down". 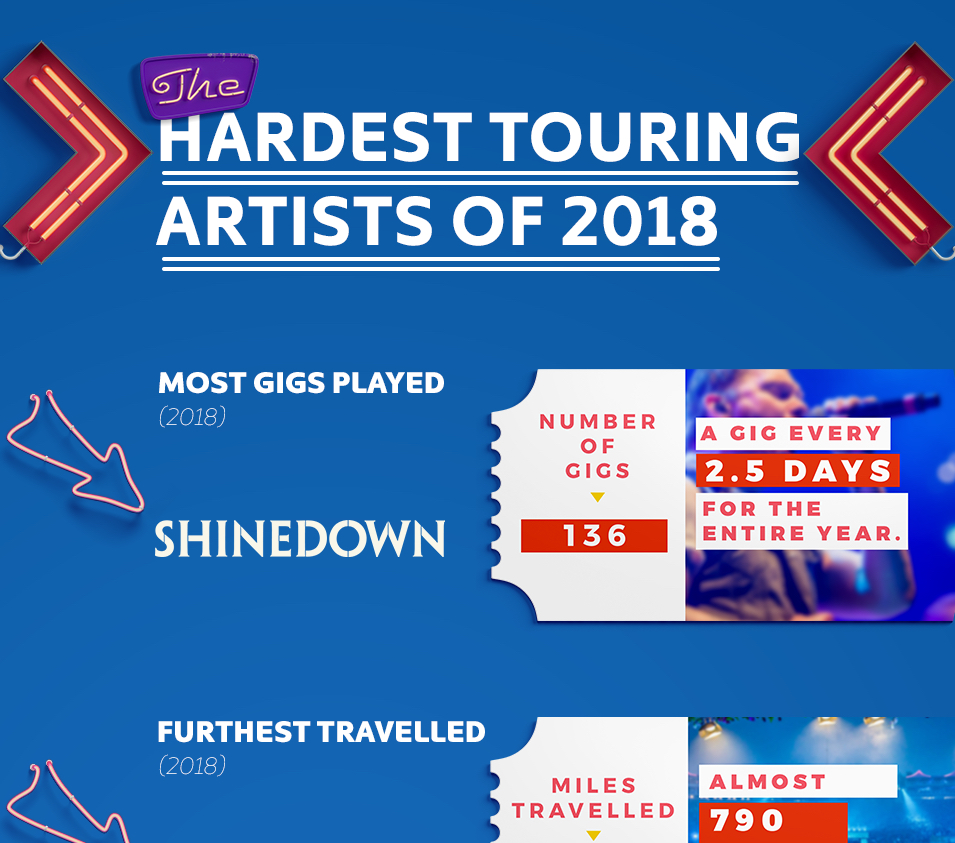 The hardest working band in terms of their sheer amount of shows in 2018 was alternative metal outfit Shinedown with an impressive/suicidal 136 gigs in 12 months. Which makes us wonder: how come we've never heard of them? Are we that out of touch?

However, when looking at the furthest distance travelled between performances, electronic producer R3hab took the most scenic route. Again, however, not so scenic that we've ever heard of him.

When comparing the genres we chose, rock and metal came out on top for the number of performances. Life on the road, lugging around guitars and amps and drums, must still hold some kind of romantic appeal. But whilst the top 10 dance and electronic artists may have played fewer venues they're not shy of some serious jet-setting - clocking up over two million miles between them. Their frequent flyer rewards must be awesome.

OK, beyond the headlines...who's really put the graft into their craft this year? Based on the six genres we've focused on, we've put together a series of Top 10 lists for your amusement.

Fun fact: based on the miles travelled between their performances in 2018, every band featured in our top 10 lists has effectively circumnavigated the world at least once this year.

When you think of big tours and life on the road, it's likely you'll be picturing a rock band. Our research shows that this isn't just an unearned stereotype, with bands like Portugal. The Man, The Wombats, alt-J, Editors and Franz Ferdinand racking up tens of thousands of miles to keep their fans happy.

Fans of metal music are some of the most dedicated in the world, so it makes sense that their idols are just as fanatic about touring their music as metalheads are about moshing along to it. The top 10 includes plenty of well-known names that haven't become complacent with their craft from heavy metal heroes Judas Priest to crowd-pleasing thrashers Bullet For My Valentine.

From euphoric trance through to twitchy techno, these artists pack out venues all over the world. 2018's top 10 hardest touring dance artists includes plenty of household names like Tiësto and Benny Benassi as well as both members of Major Lazer, DJ Snake and Diplo.

For those looking for a more chilled experience, you're never far from a superb electronic set (or so it seems based on this lot's touring schedule). Those topping the listings for relentless touring include electro-funk duo Chromeo, producer extraordinaire Bonobo and the synth-stylings ODESZA.

Fans of hip hop are living in a golden age of quality and variety. Whether you're into rap, trap or something a bit more alternative, there are plenty of artists out on the road to bring you what you crave. The top 10 hardest touring hip hop artists include some of the best the genre has to offer including Migos, Travis Scott and Talib Kweli.

For those who prefer something a bit more sombre and thought-provoking, there are plenty of guitar-toting troubadours constantly touring. Whether you’re a country buff, a folk fanatic or (for whatever reason) enjoy pop-driven reggae, there’s likely a live show for you. The biggest grafters in singer-songwriter category range from legends like Bob Dylan and Willie Nelson who – in their 70s and 80s respectively – put our work ethic to shame, to artists who aren’t yet pension age including Iron & Wine, KT Tunstall and Father John Misty.

We collated data from the top 1,000 artists on Songkick (Nov/Dec 2018) to ensure a large enough pool of results for this study. Data on gig numbers and ‘entire career distance’ were also sourced from Songkick.

2018 mileage figures were worked out by cross-referencing the Songkick data with two other gig listings sites (Bands In Town & Jam Base) and then using a mapping tool to calculate the total number of miles travelled between each performance.

It's been another fine year for music. But you wanna know the best of the best, right?

That's what our Albums of the Year lists are for. The best new albums and reissues to have graced our ears this year. 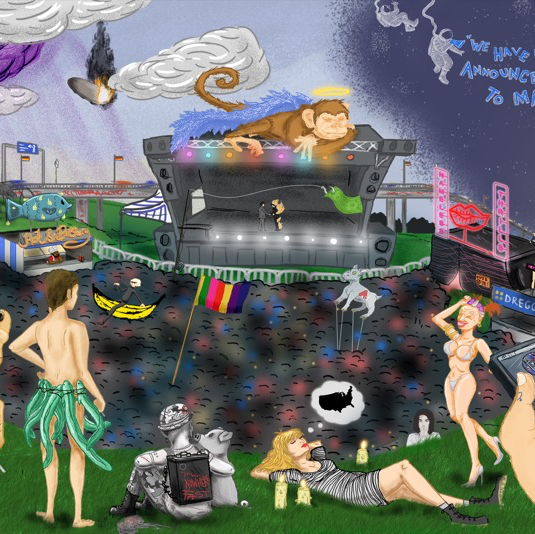 Fancy testing your cover art know-how? Try our Cryptic Vinyl Challenge, featuring some of the best albums from the 60s onwards.

Do you have what it takes to identify all 30?

If you’re looking for more information on the music that matters, get yourself over to our Features section »